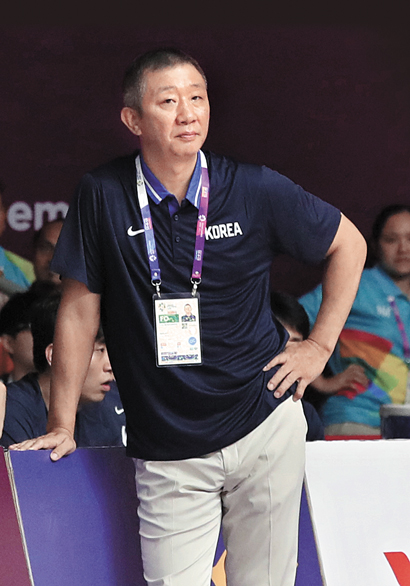 Hur Jae, former head coach of the Korean men’s basketball team, watches his players during a quarterfinal match against the Philippines at the 2018 Asian Games in Jakarta on Sept. 5. [YONHAP]

As any parent that has ever coached their child through Little League Baseball or after-school football knows, avoiding any signs of favoritism is absolutely crucial. The stakes are higher for coaches picking their own children for a national team - bring home a victory and its glory for all the family, but play badly and it could cost both coach and player their careers. 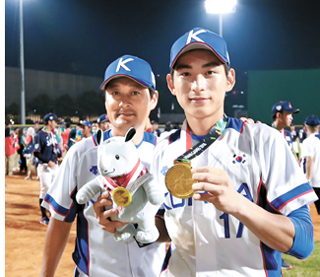 The Korean baseball team’s base running coach Lee Jong-beom, left, and Lee Jung-hoo pose after winning a gold medal at the 2018 Asian Games at GBK Baseball Field in Jakarta, Indonesia, on Sept. 1. [YONHAP]

Team Korea’s Asian Games team contained two father-son duos - one in baseball and one in basketball - with completely different results.

In baseball, Lee Jung-hoo of the Nexen Heroes and his father, Lee Jong-beom, became the first father-son duo to win gold at the Asian Games in the sport, competing as a player and base running coach.

In basketball it was a very different story. The team’s head coach Hur Jae selected not one but two of his sons for the national team at the Games. The team finished with a bronze medal, a disappointing result for the defending champion, and the resulting controversy over player selection led to Hur’s resignation and both of his sons being excluded from national team selection.

Since Hur was appointed as head coach in June 2016 he led the team to finish third at the 2017 FIBA Asian Cup and made it through the first round of the FIBA World Cup qualification earlier this year. Before his resignation he was expected to stay on as coach until February 2019.

Although Hur ostensibly resigned because Korea failed to win gold and defend its title by losing 68-80 to Iran in the semifinals, it is likely that he was heavily influenced by the controversy surrounding the selection of his sons.

Hur’s two sons - Heo Hoon and Heo Ung - have consistently made it onto the national team since July 2016, one month after their father was appointed as coach. Their selection for the national team for the Asian Games did not go down well with fans as there were better options available in the same positions.

Heo Hoon of the Busan KT Sonic Boom was drafted first in the KBL rookie draft last year and finished his rookie season with 10.59 points and 4.28 assists per game, a good lead in assists among rookies.

However, when it came to player selection, Heo Hoon wasn’t the obvious first pick. Since Heo Hoon is considered to be short for a point guard, standing at 1.80 meters, coaches have continuously talked about selecting a different player.

Hur disagreed and selected his son, saying, “there were arguments that we should select a different player because Hoon is short but because I didn’t think that, I selected him. Not because he’s my son, I thought he would bring more positives to the team strategy. I should take the responsibility for the result. The players worked their hardest in a difficult situation.”

However, Hur wasn’t able to prove the fans wrong. In fact, it seemed like he may have started to take the criticism on board - Heo Hoon didn’t make a single appearance in Korea’s final three games of the Asiad.

Once Hur resigned, both of his sons were excluded from the roster for the upcoming International Basketball Federation (FIBA) World Cup qualifying games and their spots were taken by An Young-jun and Yang Hong-seok, who competed in men’s 3-on-3 basketball at the 2018 Asian Games. An and Yang managed to lead Korea to a silver medal finish.

On Friday, the Korean basketball team was called-up for its FIBA World Cup qualifying match against Jordan on Thursday and against Syria at home in Goyan Gymnasium on Sept. 17.

Unlike Hur, who insisted on adding his two sons to the national team, Lee Jong-beom, the Korean baseball team’s base running coach, didn’t recommend his son while the coaching staff was making its player selection in June to avoid possible criticism.

Lee Jung-hoo didn’t disappoint. Throughout the Asian Games, the baseball team received a lot of criticism from fans for its controversial player selection regarding military exemptions, but Lee Jung-hoo made it clear that his addition to the national team had nothing to do with his father.

Lee played as a leadoff, finishing the quadrennial event with a .417 batting average with two home runs and seven RBIs in six games. Lee’s performance was good enough that he is already being talked about as the likely candidate to be the team’s leadoff at the 2020 Tokyo Olympics.