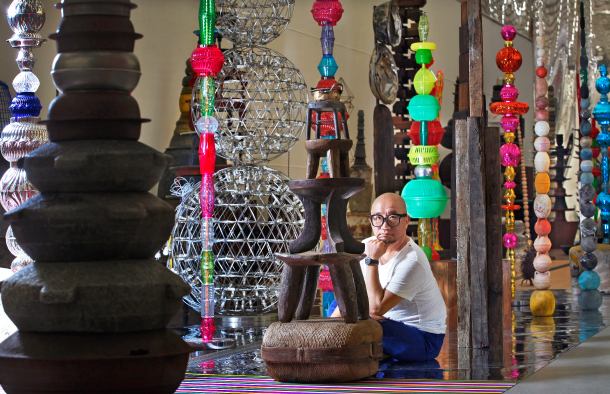 Artist Choi Jeong-hwa is surrounded by his work “Blooming Matrix,” part of a solo exhibition at the National Museum of Modern and Contemporary Art on Samcheong-ro, Jongno District, in central Seoul. [PARK SANG-MOON]

Two words come to mind when thinking about the major works of Choi Jeong-hwa, 57, one of the most internationally renowned Korean artists: “kitsch” and “sublime.”

Those seemingly incompatible qualities coexist in Choi’s site-specific public art pieces, such as a chandelier made of thousands of colorful balloons that hung in the historic St. Salvator Church in Prague in 2012 and his “Breathing Flower” series, gigantic inflatable lotuses whose petals move in a respiratory manner, which have been installed outside Boston’s Museum of Fine Arts, at La Villette Park in Paris, Banpo Hangang Park in Seoul and many other places around the world.

Asked if he also sees kitschy and sublime qualities in his works, Choi agreed, calling it “the union of the sacred and the worldly” in a recent interview with the Korea JoongAng Daily.

Choi is showing an evolution of that sacred and worldly union in a solo show entitled “Choi Jeong-hwa: Blooming Matrix,” which opened Wednesday at the National Museum of Modern and Contemporary Art (MMCA) branch on Samcheong-ro, Jongno District, in central Seoul. The exhibition is part of the annual “MMCA Hyundai Motor Series” project sponsored by the auto giant.

Until now, plastic has been Choi’s major medium. He piled up daily objects made of cheap plastic, such as plastic baskets of vivid colors found in Korean and other old-fashioned Asian markets, in inventive ways and on an expansive scale, so that the viewers could feel aesthetic pleasure to the point of sublimity.

For the new exhibition, the objects he uses go beyond plastic, ranging from wooden antique candlesticks from Korea’s Joseon period (1392-1910) to English cauldrons of iron, wooden chairs from Africa, Chinese rubber shoes and modern frying pan handles to build 146 large and small columns. Together, these sculptures are called “Blooming Matrix” and are arranged in rows in a gallery of the MMCA Seoul. They might remind a viewer of a primitive shrine full of cairns or totem poles.

The exhibition’s prologue is the “Present of the Century” series installed at the entrance of the gallery. These are stacks of plastic column capitals resembling those from ancient Greece. Coated with chrome in such vivid colors as red, hot pink and gold, they shine like chocolates wrapped in foil. “They are cast from the real columns - not ancient Greek columns, but columns used in wedding halls in Korea,” the artist said in a previous interview with the Korea JoongAng Daily in 2014.

Korea’s wedding halls are temples of kitsch with their clumsy imitations of Western classical and Baroque styles. They reflect the hasty Westernization that accompanied Korea’s rapid industrialization. Accordingly, Choi’s “Present of the Century” series has satirical and ironic tones. But his works’ charm and lightness absolve them of the pretentious thickheadedness of the wedding halls themselves. 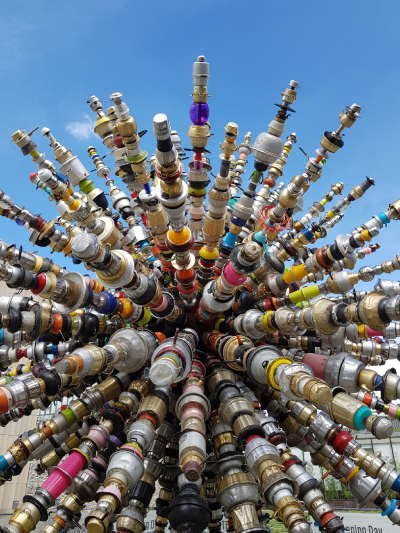 Many pieces by Choi have similarly mixed tones. His “Alchemy” series seems to consist of floor lamps made of splendid Venetian glass. In fact, they are created from cheap plastic containers. Some “Alchemy” works are included in the “Blooming Matrix” sculptures.

The sculptures include stacks of old pots, cauldrons and wooden furniture pieces, whose forms might remind the viewer of Buddhist pagodas. And there are columns made of colorful bottle caps, balloons and even buoys that once were floating in the sea.

During the interview at the MMCA Seoul on Aug. 31 before the opening of the exhibition, Choi pointed to a sculpture and called it jangseung, or a traditional Korean totem pole. It consists of an erect wooden board and a pressed metal basin on top of it, which look like the torso and head of an idol full of primitive shamanistic energy. “I obtained the wooden board in Africa long ago, and recently I got the metal basin flattened for recycling from a junkyard,” Choi said.

“Whenever I’m invited by a museum or public institution someplace in the world to hold an exhibition, I visit markets and folk museums in the region to make site-specific shows, and in recent years, I added junk shops to the places I visit,” the artist continued. “In this way, I’ve collected junk and vintage goods from all over the world. In addition, I recently went on a tour of Korea’s junk shops and recycling centers.”

Here are excerpts of the interview. 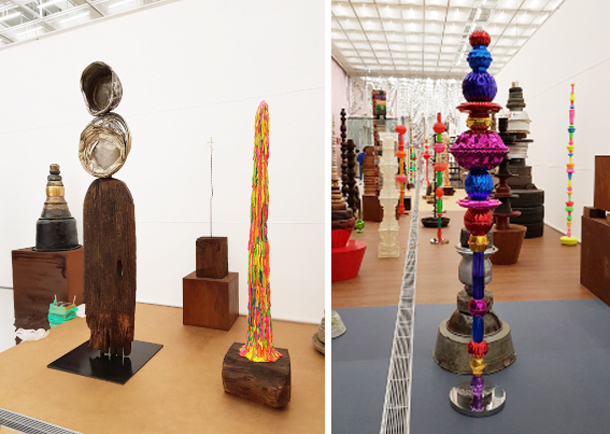 Left: More than 140 pagodas, including these created with used goods, make up the work “Blooming Matrix.” Right: One of Choi Jeong-hwa’s “Alchemy” series.

Q. Your former works, mainly made of plastic objects, used to have satirical tones about Korea’s modern mass consumption culture. The works in the new exhibition have a more anthropological or religious atmosphere, as many of them are made of old wood, iron and ceramics.

A. They still have a satiric edge about the worldly and the mundane, as [the objects that constitute the works] are from such a domain. But, as you pointed out, sacred and the worldly qualities have coexisted in my work for a long time, and, in these latest works, the message that the sacred and the worldly are not separate but one seems to have become stronger than before.

Some viewers say each of my “Blooming Matrix” columns, made of used goods and junk, is like a dignified church. In particular, we can say that the “Feast of Flowers,” a tower made of small dining tables and tableware donated by a school headmaster whose family has been living in the same house since his grandfather’s time, is a personal history museum and a temple at the same time.

When you collect objects, do you consider what kind of work you will make in advance?

Never. For example, I collected the wooden panel and the pressed metal basin for the work I call jangseung from different spots on the Earth at different times. And one day, I got the idea that this and that will be a good match. This is true for other works. So I would say that I don’t make art but I let them become art.

But if you don’t make art, what is the role of an artist? And why do you combine or arrange everyday objects, instead of just letting people feel beauty from the objects in daily life?

The role of an artist is like that of a mediator, a psychic or a shaman. There is a theory that artists have their origin in primitive shamans and priests. [As shamans can invoke spirits invisible to ordinary people and help them communicate with each other,] an artist can invoke beauty and soul from everyday objects and creations that people would have missed. Objects are just objects when people fail to notice their aesthetic and spiritual aspects. But the objects change when an artist uses them while invoking both their visual power and spirituality.

This role is not exclusive to people we call artists. Our grandmothers could do that. You know, they used to invoke the blessing of the gods in heaven and earth by praying and offering just a bowl of jeonghwasu, or clean water drawn from the well at daybreak, on top of a small dining table.

Your remarks have led me to thinking that the grandmothers’ small dining table with a bowl of jeonghwasu was the minimalized version of a holy temple, and your columns in the “Blooming Matrix” resemble them. Is it right?

Yes, exactly. That’s what I mean with my works. And my motif of stacking up objects has the meaning of prayer linking heaven and Earth, as stacks across time and space - ranging from primitive cairns to ancient Egyptian pyramids and Buddhist pagodas - had such meanings and intentions.

Would you explain your newest work “Dandelion” installed in the forecourt of the museum?

It is made of 7,000 pieces of used metal and plastic kitchen utensils, like pans and pitchers, donated by the general public in a project entitled “Gather Together.” In each utensil is inscribed the donor’s name. Now the donors have become artists, not only by participating in the creation of the work but also by taking pictures of the complete work and uploading them and taking about them on social media. I’m the mediator.