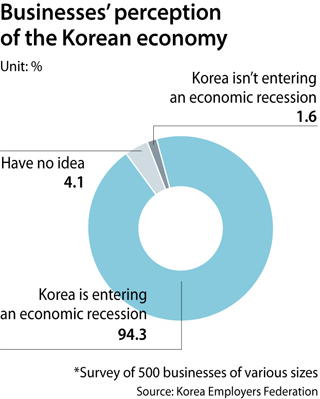 The majority of Korean companies believe the country is entering an economic recession, a recent survey by a business lobbying group showed.

A poll released on Sunday by the Korea Employers Federation of 527 companies with at least five employees found that 94.3 percent agreed that the economy is slowing down. Only 4.1 percent said they didn’t know and just 1.6 percent disagreed with the idea.

The survey was conducted ahead of the Chuseok harvest holiday, which falls during the last week of this month, to see whether companies plan to give their employees incentives for the holiday.

The percentage of companies with 300 or more workers that agreed that the Korean economy was getting into a recession was lower than those with fewer employees. Of the bigger companies, 88.9 percent said the Korean economy is souring, while 95.8 percent of small companies said the same, indicating that smaller businesses are faring worse.

Per-capita bonus income increased compared to a year before, however. It rose 3.1 percent to 1,056,000 won ($940). The federation said that the cause was the rise in base salary at many businesses due to the minimum wage hike this year. Base salaries serve as the basis for bonus calculation.