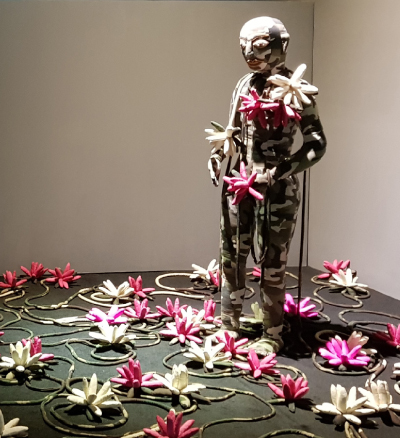 The 2018 Gwangju Biennale: Imagined Borders opened on Sept. 7, presenting many works dealing with refugees and their psychological state amid shifting geopolitical and socioeconomic boundaries. They include a poetic self-portrait of a Cambodian artist who grew up in a refugee camp to escape from the Khmer Rouge and a mockumentary by a Turkish artist who explored the idea, “If no one wants refugees, how about relocating them to Mars?”

The theme “imagined borders” is a variation of “beyond borders,” the theme of the first Gwangju Biennale in 1995. The multinational team of curators said that people had optimism for a borderless world and were open to refugees and immigrants at the time, but the world is going the other way today. “I hope the Biennale helps people seriously think about the issue,” the curators said.

There were many artworks that expanded the scope of thinking and moved my heart.

But a regrettable point was that most of the works are from the perspective of refugees or Western male artists who feel in some way beholden to third-world refugees as the descendants of empires. Few represent the perspective of those who feel that they are just as vulnerable as the refugees and would suffer even more because of them. This is what brought about the intense reaction to asylum seekers in Korea.

Historian Lim Jie-hyun was recognized for coining the term, “victimhood nationalism,” meaning a group mindset that we did not invade but had been invaded, and as victims, we rightfully have exclusive nationalism. There is also a victim mentality for classes, genders and generations. A survey by the JoongAng Ilbo showed that women are more hostile to refugees than men and the younger generation in their 20s and 30s are more hostile than the older generation.

A woman asked, “Are healthy male refugees more vulnerable than women fearing violence?” When an actor spoke up about the treatment of refugees, a young jobseeker refuted, “Those who have to live with the refugees are not rich people like you but working-class people like me.” I can’t say their points are unreasonable.

I hope artists will listen to these voices and also deal with the issues when the rights of different vulnerable groups clash. Of course, it is the role of politics, not art, to seek specific solutions. But it is the role of the arts to nurture open, borderless mindedness to come up with such solutions.