KakaoTalk gets ‘unsend’ feature and a facelift

KakaoTalk gets ‘unsend’ feature and a facelift 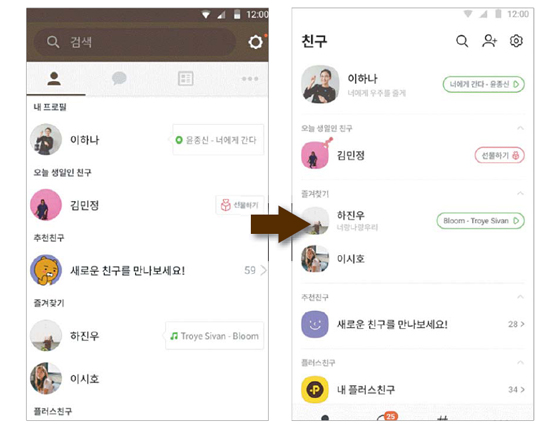 KakaoTalk received an interface makeover in a software update on Sept. 6. At left is the previous version. In the updated version on the right, the brown bar at the top has been removed and icons have been relocated to the top right. [KAKAO]

Anyone who’s ever sent a late-night text they regret will rejoice once the next update to KakaoTalk, Korea’s most popular messaging app, comes out.

Kakao announced Sept. 5 that users will soon be able to unsend messages.

The unsend feature is part of several changes to KakaoTalk, which boasted 51.3 million users as of June.

The company released its 8.0.0 update, which is mostly focused on design changes, on Thursday. The last update to KakaoTalk was four months ago.

Users’ requests for changes to the app’s features and interface have been piling up, and Kakao is in the middle of a transformation.

Expectations have been heightened after the company appointed Joh Su-yong, an industrial designer-turned-entrepreneur, as its new co-chief executive officer March.

An end to messaging mistakes

“The message unsending feature, which many users have been looking forward to, will be offered soon,” said Kakao in a post on its website. “Please wait for a while.”

Currently, users can delete any message from their own account. But other users in the same chat room can still see them.

Kakao has yet to decide on a specific timeline for the new feature or other details, such as whether to allow users to unsend read messages as well as unread ones. Its spokesperson only said the upgrade will be available before next year.

The company is a latecomer among global chat app operators, which offer various versions of unsend features.

Whatsapp, the most popular mobile chat app outside of Korea, added the feature in October last year, but with some limitations.

\When a user unsends a message, photo, video or voice message, the recipient will receive a notification that message was deleted.

Telegram, a heavily encrypted and messenger app, was one of the first global players to add an unsend feature in January of last year. Users can delete messages from both on one-to-one and group chat rooms within 48 hours of sending them.

Line issues a warning to users that, depending on their version of the software, unsent messages may not actually be deleted.

The 8.0.0 upgrade was initially made available for Android users on Thursday and it took a day longer for iPhone users to get it done. An upgrade to the PC version of the messenger will follow suit, but Kakao hasn’t unveiled the schedule for it.

The company explained that the update focused on improving the user experience through simplifying the layout and colors so that users can concentrate on their conversations.

The brown bar with a search slot at the top of the app’s front page has been removed and icons for adding friends, chat rooms and settings was placed together at the top right. The big yellow icon with a plus sign at the bottom right has also been removed.

Android smartphone users, who used to see icons on the top of the app when they selected the chat option, now have them relocated to the bottom, making it easier for users’ thumbs to reach. The icons were already placed at the bottom of the app on iPhone.

The way the app displays user profiles has gone through a makeover, too. The main profile photo, which used to be circular, has turned into rounded square.

“Square shape can contain more of the image than circles,” said Kakao.

Users’ status messages, which used to be placed right next to their names, have been relocated to below the name.

With the previous software upgrade on May 24, the Kakao enabled users to reply to a specific message by tapping the message. This feature, which many users are still not aware of, is useful when the flow of a conversation is fast and a user does not want to miss a question.