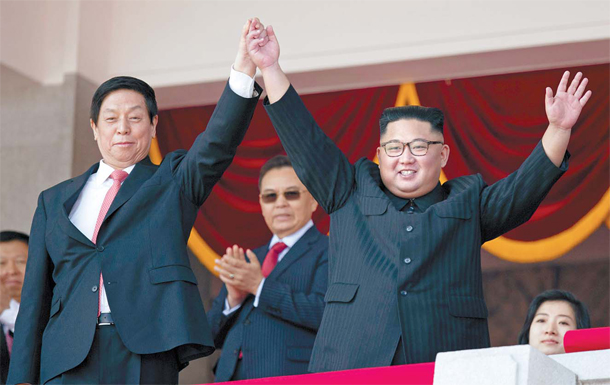 North Korean leader Kim Jong-un, right, raises his hand with China’s third highest ranking official, Li Zhanshu, during a parade for the 70th anniversary of North Korea’s founding day in Pyongyang, North Korea, on Sunday. North Korea did not show off any inter-continental ballistic missiles during the parade. [AP/YONHAP]

North Korea on Sunday staged a major military parade featuring over 10,000 soldiers and rows of tanks rolling through Kim Il Sung Square in Pyongyang, but it held back from showing off intercontinental and medium range missiles to avoid upsetting the United States.

Commemorating the anniversary of its 1948 founding, the Kim Jong-un regime staged its first military parade since a landmark June 12 summit between Kim and U.S. President Donald Trump. Eyes were on whether Pyongyang would roll out intercontinental missiles that could hit the U.S. mainland in the parade, which would have been a slap in the face for Washington as the two have been holding denuclearization talks.

It turned out the North opted to neither showcase its ICBMs nor medium-range missiles, according to foreign media reports filed by correspondents in Pyongyang.

Another story by AFP reported that only Kumsong-3 anti-ship cruise missiles and Pongae-5 surface-to-air missiles were showcased.

The parade began around 10 a.m. and lasted for around two hours and was said to have shifted its focus from the North’s military might to the importance of economic development.

“If the North had rolled out intercontinental missiles like it did in the past, it would have raised serious questions over its sincerity for denuclearization among U.S. officials,” said Cheong Seong-chang, a senior researcher at the Sejong Institute in Seoul specializing in North Korea affairs. “The fact that it chose not to do so could be seen as a statement of its seriousness about denuclearization, thus continuing the momentum for talks with Washington,” he continued.

In its parade on Feb. 8 to mark the military’s founding anniversary, the North showcased two types of ICBMs - Hwasong-14 and Hwasong-15 - that could hit the continental United States. The Sunday parade was not broadcast live by the North’s state-run media, which has yet to air the event as of press time.

In a photo published by AFP, North Korean leader Kim Jong-un held up his hand with Li Zhanshu, the head of China’s parliament and the third-ranking member of Beijing’s Communist Party, on a balcony overlooking the parading soldiers in a symbolic gesture to highlight the traditionally close ties between the countries. Li, a member of China’s Politburo Standing Committee, represented Chinese President Xi Jinping, who skipped the event and instead sent a congratulatory message.

In the message, which was published by the North’s Korean Central News Agency Sunday, Xi said it was China’s “unshaking policy” to “successfully defend, cement and develop bilateral relations.”

“I have a willingness to promote the prolonged, sound and stable development of the China-DPRK relations together with you and thus bring more wellbeing to the two countries and their peoples and promote regional peace and stability,” Xi said in the message. DPRK is an acronym for the North’s official name, the Democratic People’s Republic of Korea.

There was speculation that Xi would make what would have been his first visit to Pyongyang since taking power in a sign of the full restoration of bilateral ties with the North.

Instead, Xi opted to send high-ranking officials of the Communist Party, including politburo standing member Li and Wang Yang, another member of China’s seven-member Politburo Standing Committee, its most powerful governing body, as well as Vice President Wang Qishan.

Though Xi skipped the event, the list of senior Chinese officials invited to Pyongyang is a strong indicator that relations between the two countries have recovered significantly after years of tension sparked by the North’s series of nuclear and long-range missile tests despite Beijing’s objection. Frustrated by the North’s provocations, Xi refused to meet the North Korean leader until this year. His refusal to meet ended in March when Kim made his first official overseas trip to Beijing and had a summit with Xi, which has been followed by two other summits.

Aside from Chinese officials, around 600 foreign dignitaries made visits to Pyongyang to commemorate the anniversary, including delegations from Cuba, Iran, Lebanon, Sweden and Singapore, among others.

Kim Yong-nam, the head of the North’s rubber-stamp parliament, delivered an opening address instead of Kim, in which he emphasized “the economic goals of the regime, not its nuclear might,” according to AP.

The Sunday parade came amidst denuclearization talks with the U.S. that recently showed signs of progress after weeks of stalled talks.

South Korean President Moon Jae-in sent his national security adviser, Chung Eui-yong, to Pyongyang on Wednesday in an effort to help the two sides move closer to a middle ground in denuclearization talks.

Following his visit to Pyongyang where he met with North Korean leader Kim, Chung said Kim had stated his “unwavering trust” in Trump and that he would be steadfast in denuclearization talks despite the “slight difficulties” the two have faced. Kim also said he hoped to denuclearize his country by the end of Trump’s first term, or January 2021, according to Chung.

In response to Kim’s remark, Trump tweeted: “Kim Jong Un of North Korea proclaims ‘unwavering faith in President Trump.’ Thank you to Chairman Kim. We will get it done together!”

Such an exchange has heightened expectations that some kind of settlement could be reached by the two in their denuclearization talks.

The North’s founding anniversary came nine days before the scheduled summit between the leaders of the two Koreas - Moon and Kim - in Pyongyang from Sept. 18 through 20.

Playing the role of a mediator trying to narrow down differences between Pyongyang and Washington on specific denuclearization steps, Moon is expected to discuss a denuclearization roadmap with Kim and declaring an end to the 1950-53 Korean War, which ended in an armistice, not a peace treaty, leaving the two Koreas technically at war.

Formally ending the war that broke out 68 years ago will be the starting point for Pyongyang to normalize ties with Washington, which it sees as essential in guaranteeing its security.