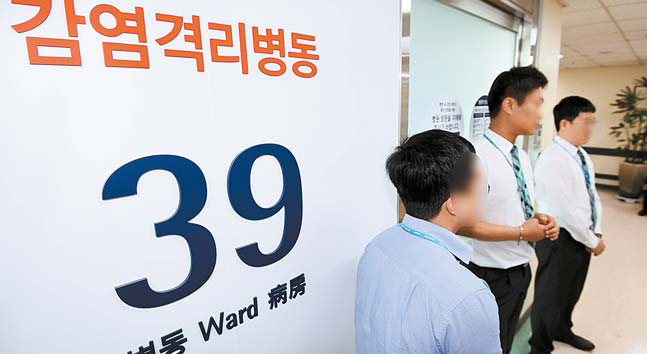 Security guards stand guard on Sunday at the entrance to the infectious patient isolation ward at Seoul National University Hospital, where a MERS patient was hospitalized for treatment. [YONHAP]

The first case of Middle East respiratory syndrome (MERS) in Korea in three years was confirmed on Saturday.

A 61-year-old man who recently returned from a trip to the Middle East tested positive for the deadly infection.

“Health authorities are responding to the case of a 61-year-old man who visited Kuwait and stopped by Dubai before returning to Korea who tested positive for MERS,” the Korea Centers for Disease Control and Prevention (KCDC) said in a statement Saturday.

The patient was in Kuwait from Aug. 16 until Thursday. He transferred flights in Dubai and arrived at the Incheon International Airport Friday. He was quarantined over MERS symptoms on Friday and tested positive on Saturday, the KCDC said.

It was the first reported case of MERS here since 2015, when it killed 38, infected 186 and caused 16,700 who were in close contact with the patients to be quarantined or placed under house arrest. The 2015 outbreak was the largest ever recorded outside of the Middle East.

As of Sunday, 22 people have been confirmed to have had close contact with the man, including his wife, airport staff, cabin crew, passengers on the same flight and medical staff members. The KDC has asked these people to voluntarily quarantine themselves at home for the next two weeks, and local health authorities will be checking upon them regularly to see if they show any symptoms. The MERS virus has an incubation period of up to two weeks.

Some 440 people who took the same flight with the man will also be monitored by health authorities. The KCDC will be analyzing CCTV camera footage at the airport and hospitals to identify any other people who may have come in close contact with the patient.

The man was quarantined at Samsung Medical Center in southern Seoul on Friday and moved Saturday to Seoul National University in central Seoul.

MERS is a type of coronavirus that is suspected to spread to humans through direct or indirect contact with infected camels. Respiratory secretions from an infected person, including coughs, can spread the disease among humans, though the exact means by which the virus spreads have not been confirmed, according to the U.S. Centers for Disease Control and Prevention.

About 35 percent of those diagnosed with MERS die, according to World Health Organization. No vaccine is currently available.

One of the biggest contributors to the severity of the 2015 outbreak was sloppy procedures and a lack of an epidemiological system at hospitals. The first patient, a 68-year-old man who had returned from a business trip to the Middle East, began to feel ill and visited three different medical facilities and the emergency ward of a major hospital in Seoul before finally being diagnosed with MERS. He was the first Korean to ever be diagnosed with the disease.

By the time he was diagnosed, he had come in close contact with enough people that the virus was able to spread with blinding speed. More than 80 hospitals visited by MERS patients or those suspected to have the disease were shut down and over 2,000 schools were temporarily closed.

This time, the patient was quarantined at a hospital within 24 hours of his arrival in Korea, though it was largely up to the patient to report himself to authorities.

The quarantine officials at the Incheon airport failed to catch him, even though he had written down on his arrival card that he had diarrhea 10 days earlier.

“At the quarantine line at the airport, the man’s body temperature was at the normal level of 36.3 degrees Celsius, and he didn’t report any respiratory conditions,” said Jeong Eun-kyeong, director of the KCDC, at a press conference on Saturday where he explained why quarantine officials let the man leave the airport.

MERS symptoms include fever, cough, shortness of breath, pneumonia and diarrhea, according to the World Health Organization.

The KCDC said the patient, upon arriving at the airport, felt that his diarrhea condition from 10 days ago was coming back. He then took a cab from the airport to Samsung Medical Center. On the way to the hospital, the man called the hospital in advance to let them know about his condition and that he was just coming home from the Middle East, a KCDC official told the JoongAng Ilbo.

“Having been informed of this, Samsung Medical Center isolated him from his arrival at the hospital [at 7:22 p.m. Friday],” according to the official.

After confirming that the man was also showing symptoms of pneumonia, the hospital suspected that he may have MERS and reported the case to the KCDC at 9:43 p.m. on Friday.

A little past midnight, the man was then moved to Seoul National University Hospital, which is equipped to deal with MERS patients. He tested positive for the virus at around 4 p.m. Saturday.

The KCDC raised the national alert for MERS from one to two out of its five-level system. Under a level-two alert, local governments throughout the country launch emergency response teams to prevent an outbreak.

“The Seoul city government will be checking with the hospital if proper medical practices are being followed to ensure that the disease does not spread,” Park said in a press conference at the hospital on Sunday morning. “We learned three years ago that overreacting and taking measures in advance is better than responding too late when it comes to dealing with infectious diseases.