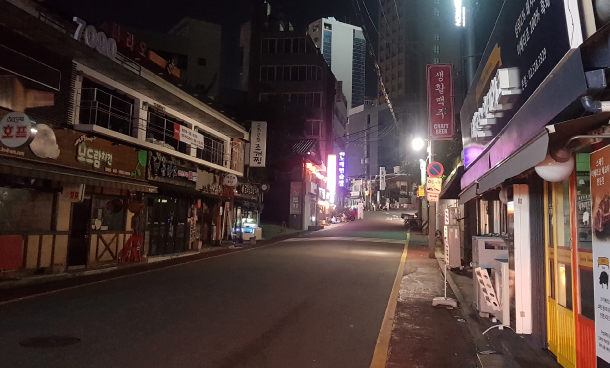 The ganjanggyejang golmok, or alley of soy-sauce crab restaurants, in Sinsa-dong, Gangnam District, southern Seoul, sits empty on a recent night at 2 a.m. In the past, it bustled with middle-aged men until early in the morning. [HAM JONG-SUN]

The ganjanggyejang golmok, or alley of soy-sauce crab restaurants, in Sinsa-dong, southern Seoul, used to swarm with hungry office workers every night. Middle-aged leaving work together crowded the neighborhood’s many restaurants and pubs until the wee hours of the morning.

That is, until the new 52-hour work week went into effect July 1.

As people find more leisure time after work, fewer are eating out with their colleagues, analysts say, jeopardizing the country’s dining industry. Workers in Sinsa-dong said they were already feeling the effects of the new workweek.

“It just gets really empty here by 11 p.m.,” said a custodian at a commercial building. “I think it’s because of the 52-hour workweek.”

The owner of a barbecue restaurant that’s been in the area for the past 11 years said that the restaurant’s customers have dwindled.

“I keep the store open just in case my patrons come, but we’re running up more and more deficits as time goes by,” she said. “Business owners here say there are many restaurants whose part-time servers earn more than the owners.”

“It’s a vicious cycle for restaurant owners,” said Kwon Gang-su, director of the Korea Establishment Realty Agent. “They have fewer customers due to the 52-hour week policy, then they’re hit with the minimum wage hike and higher ingredient costs, so their expenses keep snowballing.”

Sung Tae-yoon, a professor of economics at Yonsei University in Seoul, said the government’s 52-hour workweek was wreaking havoc on society’s most vulnerable members, and said that a change to the system was needed.

Mr. Kwon, 46, who runs a franchise eatery in Gangnam, said his restaurant lost the most sales during weeks with holidays in the beginning or end of the week, when people are off work for at least three days in a row. Kwon said that these days, many workers are leaving the country for vacation on holidays, which hurts his business. “Young people nowadays save up on eating-out expenses to spend their vacations overseas,” said Kwon. “Our sales are a wreck during long national holidays.”