Ex-foreign minor leaguers are top picks in the KBO draft

Ex-foreign minor leaguers are top picks in the KBO draft 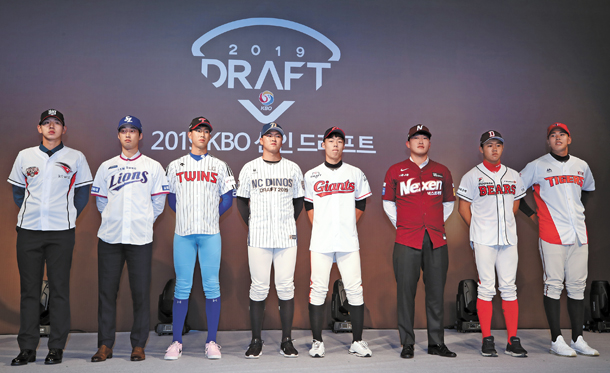 From left: Rhee Dae-eun of the KT Wiz, Lee Hak-ju of the Samsung Lions, Lee Sang-young of the LG Twins, Song Myung-ki of the NC Dinos, Koh Seung-min of the Lotte Giants, Yoon Jeong-hyeon of the Nexen Heroes, Jeon Chang-min of the Doosan Bears and Hong Won-bin of the Kia Tigers. [YONHAP]

Former Chicago Cubs pitching prospect Rhee Dae-eun was the first to be selected overall in the annual Korea Baseball Organization (KBO) draft in Seoul on Monday.

The KT Wiz picked the 29-year-old right-hander as their top pick for the pro baseball draft.

Those who finished high school in Korea and played for foreign professional clubs without having competed in the KBO were eligible for the draft, as long as their first pro contract expired before Jan. 31, 2017.

Rhee signed with the Cubs in 2007 right out of high school and spent seven seasons in the Cubs’ minor leagues, compiling a 40-37 record with a 4.08 ERA in 135 minor league appearances.

He never pitched in the majors and only got as far as Triple-A in 2014.

Rhee also spent two seasons with the Chiba Lotte Marines in Japan’s Nippon Professional Baseball (NPB), and represented Korea at the inaugural Premier 12 tournament in 2015 and the World Baseball Classic in 2017.

Currently completing his mandatory military service while pitching for the National Police Agency team in the Futures League, Rhee is scheduled to be discharged later this month.

“I’d like to thank the Wiz for selecting me, and I’ll try to live up to the club’s expectations,” Rhee said. “I’ll try to become the type of player that the team needs.”

The No. 2 pick in the draft was another former Cubs prospect, infielder Lee Hak-ju, by the Samsung Lions.

Once a highly touted defensive whiz at shortstop, Lee was plagued by a series of injuries and also never got past Triple-A. Most recently, Lee played in 47 games for the San Francisco Giants’ Triple-A affiliate in Sacramento, batting .265 with three homers and 12 RBIs.

“It’s an honor to be picked by the Lions,” Lee said. “I am really looking forward to next year. I hope I can help the club.”

The 26-year-old was an eighth-round KBO draft pick by the Lotte Giants in 2012 but chose to pursue higher education instead. He dropped out of Dongguk University in central Seoul during his freshman year to sign with the Orioles.

A third ex-Cubs product, outfielder Ha Jae-hoon, was drafted in the second round, 16th overall, by the SK Wyverns.

Ha batted .265 with 38 homers and 288 RBIs in seven minor league seasons, which included a stint in Triple-A in 2013 and 2014. He played in 17 games for the Tokyo Yakult Swallows in the NPB in 2016 and recently played independent ball in Japan.

Rhee, Lee and Ha were teammates on the Boise Hawks, the Cubs’ low-A affiliate, in 2009.

The teams selected six pitchers and four infielders in the first round. By positions, there were 55 pitchers, 26 infielders, 10 catchers and nine outfielders.

The draft was held in reverse order of the 2017 regular season standings, meaning the Wiz had the top pick, followed by the Samsung Lions, the Hanwha Eagles and so forth. The Kia Tigers were last to pick. The 10 clubs were each allowed to select up to 10 players.