Some worry that Son Heung-min is being overworked

Some worry that Son Heung-min is being overworked 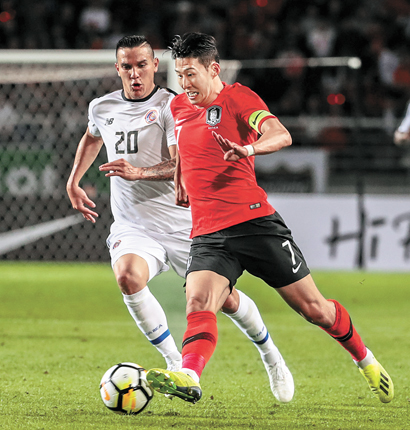 Son Heung-min, in red, dribbles the ball during Korea’s friendly match against Costa Rica at Goyang Stadium in Gyeonggi on Sept. 7. [NEWS1]

There’s no doubt that Tottenham Hotspur’s Son Heung-min is Korea’s best football player. Now, some are questioning whether the national team may have overused their biggest star.

During the Asian Games, Son’s military exemption received a lot of media attention. Now that the problem of his military service has been solved, the media has shifted its focus to Son’s busy schedule.

Right after Korea’s friendly match against Costa Rica on Friday, 90min.com, a football news site, published a story about Son with the headline “Give him a Rest!”

Looking at Son’s recent schedule, it’s no exaggeration to say he’s been overloaded. After finishing the 2017-18 Premier League season with Tottenham Hotspur, Son quickly joined the Korean national team in May to prepare for the 2018 FIFA World Cup in Russia. After playing two friendly matches against Honduras and Bosnia and Herzegovina, Son departed for Austria. There he played in two more friendly matches against Bolivia and Senegal before playing in three group-stage matches against Sweden, Mexico and Germany at the World Cup.

After the World Cup, Son had a short three-week break. Afterwards, he headed to the United States to play for Hotspur in the International Champions Cup, a preseason tournament. After playing three matches with Hotspur, Son quickly headed to Indonesia to compete with the U-23 Korean football team at the Asian Games, playing in six of the seven matches.

But that wasn’t the end. Once he returned to Korea with his gold medal from the Asian Games, Son had just one day of rest before he joined the senior national team led by new head coach Paulo Bento.

Since Korea’s friendly match against Honduras on May 28, Son has played 19 matches over the 110 days, an average of one game every five days. In addition to the number of matches, the total distance Son has traveled is impressive. He flew a total of 76,597 kilometers (47,595 miles) since May.

Despite the tough schedule, Son still isn’t done. He is expected to play in Korea’s friendly match against Chile at Suwon World Cup Stadium in Gyeonggi tonight. Although Son will be done with the national team’s schedule after tonight’s match, he is not done with his football season. Once Son returns to England this weekend, he will have to get right back into Hotspur’s schedule. Son is expected to play this weekend against Liverpool.

Since he’s been playing so many matches, Son is in good shape, but he’s running the risk of getting injured.

“If an athlete competes in more matches than their body can take, it can increase the risk of a ligament and muscle injury,” said Jeong Tae-seok, the owner and director of the Sports Performance Institute of Korea. “It can also lead to underperformance. But for Son Heung-min, he’s been traveling more than competing in matches. This can add more pressure to his body.”

Although Son may have had an arduous 2018 schedule, Jeong said it might provide an opportunity for Son to prove himself as a top-class football player if he can consistently play well with Tottenham this season.