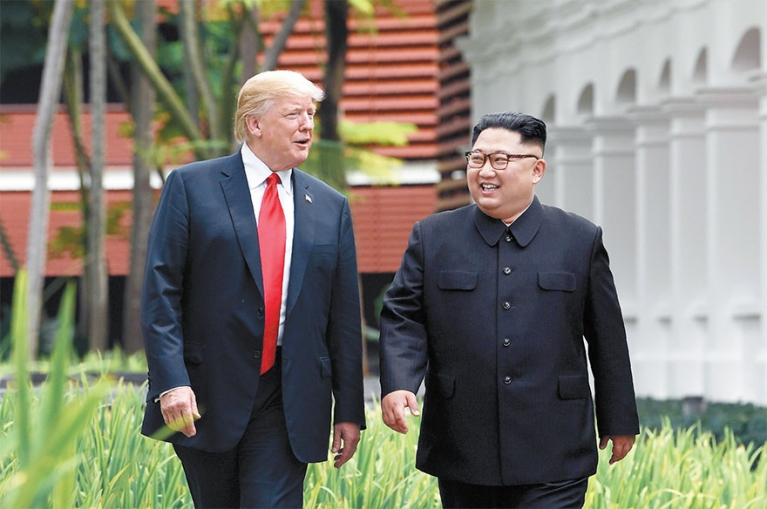 What U.S. President Donald Trump said at his first summit with North Korean leader Kim Jong-un in Singapore on June 12 was shocking. He called the Korea-U.S. joint military exercise “inappropriate” and “provocative.” Trump said it was costly to send fighter jets from Hawaii to the Korean Peninsula. On Kim Jong-un, who has purged many of his political enemies, Trump said, “Well, he is very talented. Anybody that takes over a situation like he did at 26 years of age and is able to run it and run it tough.” The foreign affairs and security community in Washington criticized his remarks.

But it seems that those in the Trump administration did not find it so unusual, as described in “Fear: Trump in the White House,” by Bob Woodward, a Washington Post reporter famous for uncovering the Watergate scandal, and an anonymous op-ed in the New York Times by a senior official titled “I Am Part of the Resistance Inside the Trump Administration.” The two stories that stirred the United States claim that officials were engaged in a separate diplomatic agenda to “protect the United States” as Trump has a subpar understanding of security. For instance, Defense Secretary James Mattis described him as having the understanding of a “fifth or sixth grader.” The stories show that Trump favors dictators like Kim and disregards the United States’ allies.

Since Kim’s debut on the international stage through the Panmunjom summit on April 27, many countries have attempted talks with North Korea, but it is rare to find a country openly complimenting Kim. But Trump and the South Korean government are different. President Moon Jae-in said that Kim was frank and polite, respecting his seniors. Prime Minister Lee Nak-yon said that Kim was a leader who values the lives of the people. Minister of Culture Do Jong-hwan said that what we have seen is a filtered image by media and intelligence agencies. It is not unusual for South Korean envoys to convey Kim’s words to the international community exactly as Kim said. “I am frustrated that my good will for denuclearization is not acknowledged,” he told the guests from the South.

As the third inter-Korean summit is scheduled, the Blue House is to vote on the ratification of the Panmunjom Declaration today and to submit it to the National Assembly. It is controversial that a declaration that lacks specifics, aside from the progress of denuclearization, could be approved by the National Assembly. It would allow the government to proceed with the inter-Korean projects that require tremendous amounts of money.

President Moon said irreversible progress will be made by the end of this year. While denuclearization is certainly on his mind, the focus seems to be on a declaration to officially end the Korean War. I am concerned that the government wants to drive a nail through his plan while Trump is in office.