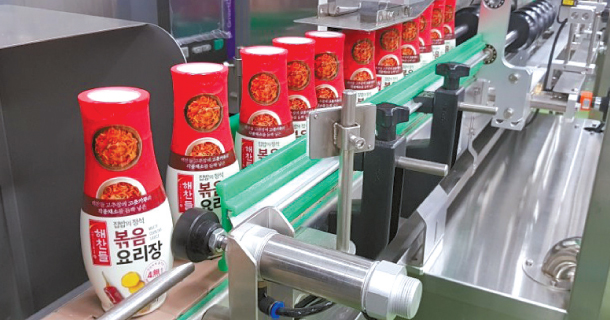 NONSAN, South Chungcheong - CJ CheilJedang recently inked a partnership with Itsu, a London-based Asian-inspired fast food restaurant chain. Within a few weeks, CJ’s chogochujang, or vinegared red chili sauce, will be on the table of the chain’s restaurants.

Through the deal, the chogochujang, which has a sweet and tangy flavor, will replace existing chili sauces. Itsu hopes the sauce will appeal to the taste buds of global consumers and eventually rub shoulders with the currently prevailing family of chili sauces - Sriracha and Tabasco.

“Our own study found that Tabasco boasts a sour and hot taste, whereas Sriracha combines sweet and hot. Both have been made with a minimum of ingredients for a simple taste,” said Oh Seon-mi, senior researcher at the CJ CheilJedang’s food research center, at the company’s manufacturing complex in Nonsan, South Chungcheong. “Gochujang [red pepper paste], on the other hand, has a more complicated taste - from sweet to salty, tangy and hot.”

Two dozen reporters took a tour around CJ’s gochujang factory, where up to 5,500 tons of the chili paste is churned out, on Sept. 7. Gochujang products make up almost one-third of CJ CheilJedang’s revenue.

CJ used the press trip to announce that it is betting on the potential of globalizing Korean jang, or fermented sauces, including gochujang, doenjang (soybean paste) and ssamjang (a spicy dipping sauce that mixes gochujang, doenjang as well as other condiments).

The company has been exporting jang products for five years, mostly under the “Haechandeul” brand, and the volume of shipments has grown steadily. Compared to 2013, the amount of jang products CJ shipped abroad grew 40.4 percent to 7,194 tons in 2017.

Current key export markets are the United States and the United Kingdom. Two gochujang products - Annie Chun’s Gochujang Sauce and Bibigo Gochujang Sauce - are being sold at Whole Foods as well as Amazon.com. CJ’s gochujang is also being supplied to Heinz, and serves as a base ingredient in the global sauce giant’s chili paste products. 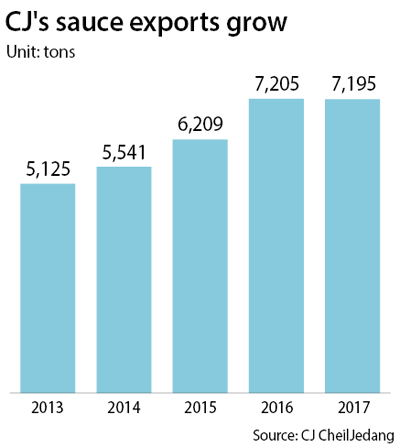 “I know that the hot taste of gochujang or unfamiliar flavor of doenjang could come across as really strange, and even awful,” she said.

Since consumers abroad are not likely to cook Korean food, like doenjang stew, CJ is focusing on selling the sauces in the form of a dip or spread.

Jang exports have another barrier to overcome in the R&D process: reducing microorganisms. It is okay to sell products containing microorganisms in Korea, where fermented foods are a common part of the average diet, but that poses a problem for exports.

Han Woong, a marketing brand manager for CJ CheilJedang, said the company has also been developing methods of making halal jang products at the request of the Korean food authorities. The key to halal-certified food is in restraining the generation of alcohol while maintaining the same quality and taste.

CJ’s products targeting the Muslim countries of the Middle East and Southeast Asia have yet to be commercialized, however. Since mass production of halal food requires sophisticated procedures, CJ would have to develop significant infrastructure to mass-produce and sell them.

CJ has opted for a long-term strategy to increase its global standing, though. It standardized the system of grading the degree of spiciness to control gochujang quality and appeal to overseas consumers.

The company has also discovered the health benefits of jang through joint studies with local researchers. One study published in the Journal of Food Science and Technology found that gochujang can prevent obesity, whereas another published in the Journal of Veterinary Science revealed that doenjang can fight the flu and enhance resistance to atopy.

CJ believes that diversifying its product lineup and taking it global will help sustain its growth. As more people eat out and an increased number of single households prefer cooking with simpler recipes, sales of CJ’s pure jang have declined by an annual average of 4.8 percent since 2012 after 11 straight years of robust growth.

However, ready-to-mix sauce products based on various jang, or “convenience sauces,” have gained favor among consumers. These come in squeezable containers and do not require extra condiments. That feature makes it easy to cook dishes like jeyuk bokkeum, or stir-fried spicy pork, by just mixing pork with the sauce and vegetables.