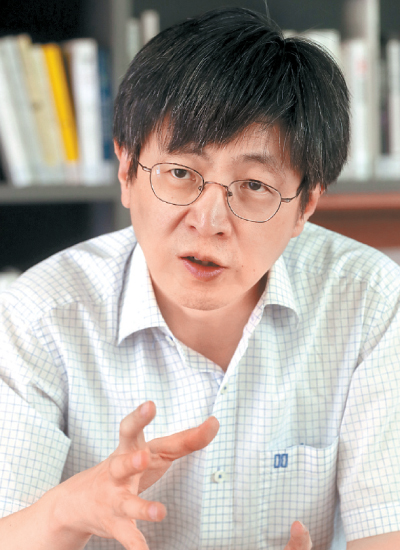 Kim Jin-soo, an adjunct chemistry professor at Seoul National University and a researcher at the Institute for Basic Science, talks in his research room in Seoul. [JOONGANG PHOTO]

A Korean professor who is considered a pioneer of genome-editing technology has been accused of unfairly crediting technology that he invented to his company without acknowledging the role of public funded research projects.

Kim is considered to be one of the first scientists to prove in 2013 that a segment of DNA called Crispr can be used in human cells to alter human DNA. A separate team at the University of California, Berkeley, is also credited with the discovery.

Seoul National University said on Monday that the technology transfer was legitimate.

The media outlet pointed to an invention report that Kim submitted to Seoul National University in November, 2012, before the technology transfer contract took place that month. In the report that describes the genome engineering with RNA-guided endonuclease, Kim listed two related research studies by ToolGen.

Hankyoreh said that Kim deliberately excluded a public research project that he was involved in between 2010 and 2014 in order to wholly switch ownership of the patent to ToolGen.

Kim told the Korea JoongAng Daily that in 2012, the research project funded by the National Research Foundation of Korea was not directly linked to the discovery of the gene editing technique.

“I didn’t mention the research project because at the time that I reported to Seoul National University in 2012, the project was not relevant to Crispr because it concerned the application of the early version of genome editing tools such as zinc finger and Talen,” he said. “So there is no problem in the reporting as the invention report asked for technology related to Crispr.”

The Korea JoongAng Daily found an official document detailing the proposal and outcomes of the state-funded research and the filing suggested that the Crispr-related study didn’t begin until 2013.

The news report also questioned Kim’s decision to apply for a Crispr-related patent in the United States in 2012, before he made his report to Seoul National University.

Kim denied the accusation, saying that in a provisional application an inventor is allowed to request a patent as an individual before registering with the institution they belong to.