With 5G, carriers have to pick patriotism or price

With 5G, carriers have to pick patriotism or price 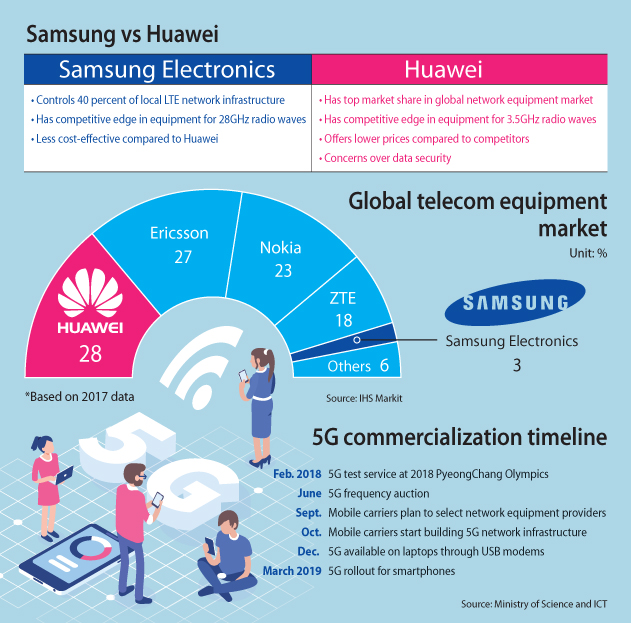 Korean mobile carriers are determined to be the first in the world to commercialize a high-speed 5G network, but they still haven’t settled on which telecom equipment supplier to use to get the infrastructure off the ground.

According to industry sources Monday, mobile carriers will select telecom equipment suppliers for their 5G service within this month and start setting up network infrastructure from next month. However, no carrier has yet announced their partner, mainly because they can’t decide whether to go with a higher-priced Korean supplier or a cheaper Chinese alternative.

Chinese company Huawei’s equipment is widely seen as the most competitively priced without sacrificing performance. The price of the Chinese company’s equipment is roughly 20 to 30 percent cheaper than what competitors like Samsung Electronics, Ericsson and Nokia offer, according to industry sources. Despite the cheaper price, its technological maturity is perceived to be on par with or better than its European competitors.

Last year, Huawei took the largest market share in the global telecom equipment market with a 28 percent stake, followed by Ericsson with 27 percent and Nokia at 23 percent, according to data from market tracker IHS Markit.

Huawei’s market dominance is largely due to massive amounts of investment - the Chinese company has poured 15 percent of its revenue into research and development since the 2010s and concentrated on an aggressive marketing strategy.

A crucial drawback, however, is the security concerns that come with the Chinese tech firm.

Though the government did not mention the company names or a specific country, it strongly implied them by issuing a statement reading “the Government considers that the involvement of vendors who are likely to be subject to extrajudicial directions from foreign government that conflict with Australian law, may risk failure by the carrier to adequately protect a 5G network from unauthorized access or interference.”

National security authorities in the United States and Britain have raised similar concerns regarding Huawei equipment, though the company has repeatedly rebuffed the criticism, insisting it is a private company and that no security-related incident has happened during the past decade.

The Korean government and the public also worry that adopting Chinese equipment could hurt the growth of domestic vendors.

Even if local carriers are the first telecom companies globally to commercialize 5G, the actual technological benefits could be reaped by Chinese companies if Korean suppliers are not involved in building infrastructure, some critics say.

“It is the mobile carriers’ decision to choose which vendor to partner with,” said Minister of Science and ICT You Young-min at a meeting with the heads of Korea’s three mobile carriers - SK Telecom, KT and LG U+ - however, he has indicated that companies should also think about fostering Korean technologies.

“Huawei equipment is cost effective, but there are too many factors to consider to make a choice based on price effectiveness,” a source from the mobile industry said.

While carriers remain silent about their choices, industry insiders speculate that it is likely they will stick with their existing 4G suppliers as the equipment will overlap during the early stages of deployment. Considering the compatibility of equipment, it could be cost effective for carriers to stick with the vendors they have partnered with.