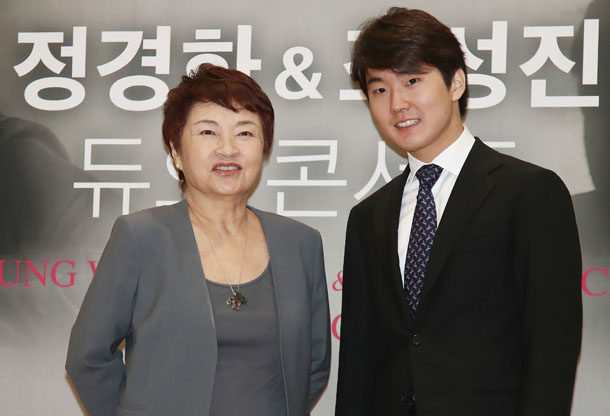 Of the many musical ensembles that exist, a duet is the most intimate. A classical duet requires two musicians to innately understand one another in order to produce a harmonious balance between their instruments.

The partnership of world renowned violinist Chung Kyung-wha and pianist Cho Seong-jin stands out not only for the music they make together, but also for their chemistry.

Regardless of their 50-year age gap, the two have come together for the World Premium Series II sponsored by the Seoul Arts Center, southern Seoul, to tour the nation in celebration of the venue’s 30th anniversary. The duo will be performing at Seoul Arts Center’s Concert Hall tomorrow.

“As a violinist, I have come to realize that partnership is important for the violin. I am very grateful that I have the opportunity to perform with the talented pianist Cho,” said Chung during a news conference at the Seoul Arts Center on Monday. “I tend to diversify my performances by improvising, and was surprised how quick Cho was able to catch on to my ad-libs.”

The two have already performed five of their seven scheduled performances. Their tour started on Sept. 1.

“It was an honor to work alongside Chung. I had wanted to team up with her again ever since I had the opportunity to do so in 2012,” admitted Cho during the press conference. “It has been an enjoyable experience, especially since every duet performance we have is different from the other.”

Their program consists of songs from Bach, Beethoven, Schumann and Franck. Every song they perform are complex and require a great amount of skill to capture the emotions that the composers intended to portray.

“I was actually surprised when I heard Cho play the Beethoven Violin Sonata No.7 in C minor,” said Chung. “The song was written by Beethoven right around when he started to go deaf. There is a part of the composition that requires [the performer] to express sudden anguish. I was surprised at how well Cho was able to express that emotion despite his young age.”

“I agree that I have a very serene personality, but this changes when I start to play the piano,” said Cho. “I guess I portray all the emotions that I normally don’t through my music. I let my music speak for me.”

Tickets for the concert on Wednesday are still available.