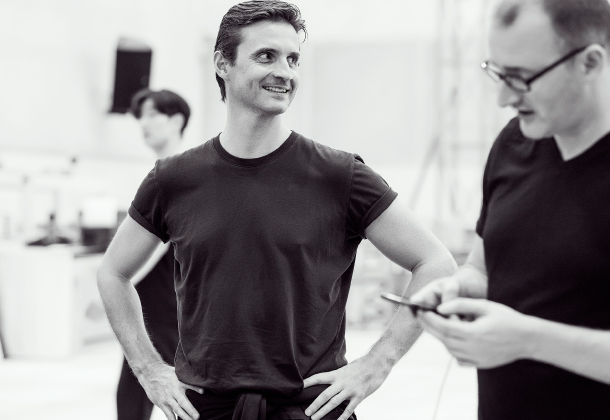 Tom Hodgson, the associate choreographer of “Matilda the Musical,” works with local producers of the show. [SEENSEE COMPANY]

A play about an adorable 5 year-old girl named Matilda and her school life may sound like a family musical or a children’s play to enjoy on a Saturday afternoon, but “Matilda the Musical” is a serious production that is sure to entertain theater fans of all ages.

The stage version of the popular 1988 Roald Dahl novel “Matilda” is an award-winning production that continues to sell out theaters on Broadway and in the West End. The show requires a large cast of young actors and is a large technical undertaking that is not easy to replicate. In fact, a foreign language version of the show has not been produced since it premiered in London in 2011.

Korean musical production company Seensee decided to take on the challenge and stage the first non-English production of “Matilda the Musical” in Korean. After months of preparations, the show finally had its Asian premiere on Saturday at the LG Arts Center in southern Seoul.

One of the major reasons why the musical has proven difficult to produce is because of its highly sophisticated choreography that is performed mostly by a cast of children who are not professional dancers, says Tom Hodgson, the associate choreographer of the Royal Shakespeare Company’s “Matilda the Musical,” who is working with the local production team. Hodgson has been training the Korean cast for more than 14 weeks to make sure the Asian premiere of the show is on par with the show staged in the West End.

To learn more about the local production and its choreography, the Korea JoongAng Daily recently met with Hodgson for an interview at the LG Arts Center. The following are edited excerpts. 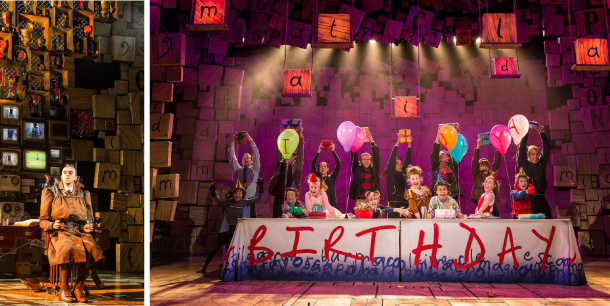 At left and right are scenes from the popular “Matilda the Musical,” based on Roald Dahl’s book of the same name. It was adapted by Dennis Kelly with music and lyrics by Tim Minchin and choreographed by Peter Darling. The Korean production premiered on Saturday. [SEENSEE COMPANY]

Q. The choreography in “Matilda the Musical” is very strong. Some critics say that choreography is central to the production. Do you agree?

A. Of course I agree. It is really strong. It is Peter Darling’s work, the award-winning choreographer behind the famous “Billy Elliot the Musical.” This musical is also really unique and complex, yet extremely entertaining. The choreography is as difficult for the kids as it is for the adults in the show and it is indeed central to the storytelling.

Then would you say there is a lot more choreography than other musicals?

I’d say in terms of the complexity of each number, there is more than most musicals. There are not more numbers but each number is so specific and so detailed in its content that it will seem there’s a lot of choreography in the show.

You keep on saying the choreography is quite complex. I guess Darling believed that it would still be possible for the children, who are non-professional dancers, to take it all in and put on a show.

Right. You know, Peter has experienced with children and I think he believes that he can push them to new levels. And he’s absolutely right. Children have no boundaries to what they can achieve. If they have the raw talent and the drive, then they are like sponges. They just soak everything up. That’s why we are able to get such amazing results for every show and for this one here in Seoul as well. 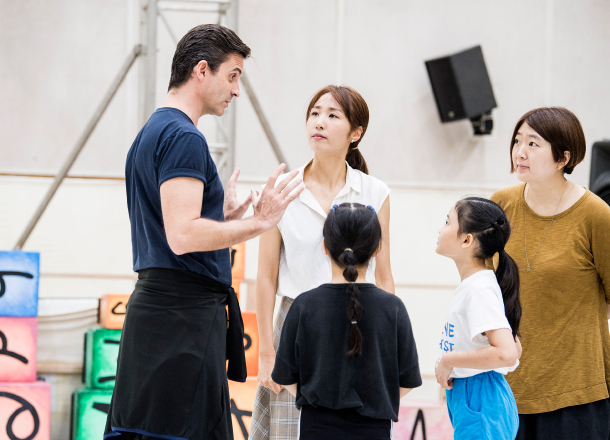 You’ve been training Korean kids for many weeks now, right?

Four girls are alternating the role of Matilda. For school kids, there are two teams of ensembles who will be alternating to cover all the shows until next year, so we have about 20 children preparing for the show here. All the production staff are please with the cast and the children have been amazing. For the first few weeks, they were quite slow because they need to understand the process on stage and they’ve never done anything with this amount of detail. But after a while, they very quickly get used to it and each day they get better, faster and stronger.

Like any cast, the kids have to learn how to process the information and it’s extremely challenging for them. But the kids we’ve had in the show, they are fantastic and they are very good pupils in terms of taking away what they’ve learned and really going through it.

You also have experience training young children for “Billy Elliot.” How are the two shows different in terms of choreography?

Firstly, the choreographic language is different. In “Billy Elliot,” there are very clear types, or disciplines, of a dance. For instance, in “Billy Elliot,” you can see classical dance, a lot of tap dance, there’s also jazz. So there’s a real exploration through the history of of dance, if you like. But in “Matilda the Musical,” it’s really about the pictures. In one of Peter’s early interviews, I read that he’s taken a lot of inspirations from the drawings of Quentin Blake, which have this sort of spiky, grotesque feel to them. They are very animated. He also looked at children studying in classrooms as to the kind of movement they have, their patterns. So he formulated something from that combined with staying very close to the lyrics and the storytelling in each number. In that way, the two are very different.

Would you say that “Matilda the Musical” is less dance-focused?

I’d say the dance is less recognizable. Although there’s some extraordinary abstract and contemporary work in “Billy Elliot,” there’s some very clearly defined styles and some very clear classical moments. So people are able to identify with the movement more easily. Whereas for “Matilda the Musical,” it’s more challenging for the audience, but no less rewarding.

I heard that the original production team doesn’t want the musical to be referred to as a family musical. Do you agree?

I’d agree. It’s for everybody. I think the first time I saw it in London before I worked for the Australian production, I absolutely loved it. It was so refreshing that I immediately thought that this would be a great project to be involved in. The message resonates with all ages. I think this is a musical for everybody and the themes are universal. Yes, the show is about a 5 year-old girl. It’s her story but the storytelling is just so beautiful and it would speak to all generations.

What’s the most difficult aspect of working with children?

I think it’s remembering that they all have different amounts of experience and that they all come from different backgrounds. When you work with adults, there’s a certain level that you expect because they are professionals so you start at a certain level and certain things have to be in place and everyone knows that. But with children you have a child who’s been dancing for seven years and a child who’s only done the audition. But of course, you have to remember that they have an equal amount of potential, otherwise they wouldn’t be in the show. But they need nurturing and developing at different speeds and levels and you have to be able to do that and keep everything moving forwards at the same time. Otherwise, children may quickly lose their confidence, and that is definitely not what you want. You want them to work hard but you also want them to enjoy themselves. Maintaining that balance is the most challenging thing.

What would you say is the highlight of the show in the terms of choreography?

I think probably the most enjoyable scene is “Revolting,” because it’s so vibrant. It’s a real celebration, and it’s so gritty, strong, and powerful. But in terms of intricacy, I would pick “School Song,” as it is extremely clever in terms of choreography and challenging for the performers.

Since you’ve been watching the rehearsals of the Korean production and training Korean kids, what is it like watching the show in Korean without any subtitles?

It sounds great to me. Even though I don’t understand the language, as long as you know the story, I am sure that anyone can enjoy the show. Koreans also can look forward to it as the Korean lyrics have been beautifully translated, bridging cultural differences.

If you are not a Korean speaker, but want to see the show, I’d say read the book or watch the film, although we have slight differences in the musical. The storytelling is just so clear and so vibrant and there’s so much to take in in terms of sound, design and movement. The production level is so high.