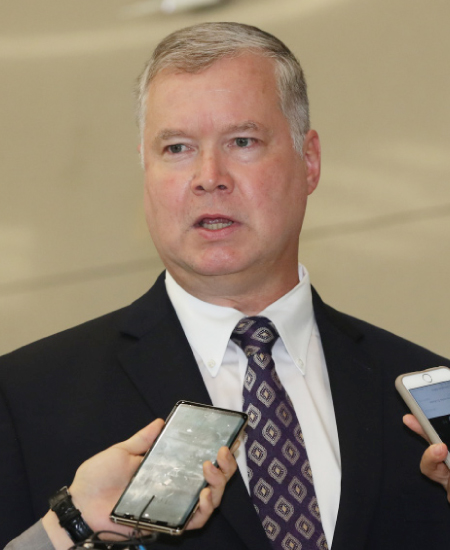 U.S. President Donald Trump praised the absence of missiles in a major North Korean military parade on Sunday and thanked North Korean leader Kim Jong-un for the gesture in a Twitter post, an indication that deadlocked talks between Washington and Pyongyang on denuclearization could be revived soon.

North Korea held its founding day parade on Sunday without showcasing its intercontinental ballistic missiles (ICBMs), touted as capable of reaching the U.S. mainland, or medium-range missiles as in previous years, a move that Trump interpreted as a gesture to avoid provoking Washington’s ire.

“Experts believe that North Korea cut out the nuclear missiles to show President Trump its commitment to denuclearize,” Trump wrote in a tweet, citing Fox News. “This is a big and very positive statement from North Korea. Thank you To Chairman Kim. We will both prove everyone wrong! There is nothing like good dialogue from two people that like each other!”

Trump’s remarks indicate dialogue with the North could get back on track again. Stephen Biegun, the U.S. State Department’s new special representative for North Korea, kicked off a three-day trip to Seoul on Monday after Trump abruptly canceled a trip to Pyongyang by U.S. Secretary of State Mike Pompeo and Biegun at the end of last month, blaming lack of “sufficient progress” on denuclearization talks.

Trump told reporters abroad Air Force One on Friday that he was expecting a letter from Kim that was delivered across the inter-Korean border on Thursday. According to diplomatic sources in South Korea, the letter could include a proposal to declare its nuclear arsenal and test sites in exchange for a declaration to formally end the 1950-53 Korean War, which technically concluded with an armistice rather than a peace treaty.

There is wide anticipation that Biegun’s trip to Seoul could add momentum to stalled North-U.S. negotiations. The visit comes after Chung Eui-yong, the Blue House national security adviser, traveled to Pyongyang last Wednesday as President Moon Jae-in’s special envoy and met with Kim. At the meeting, the North Korean leader renewed his commitment to complete denuclearization and coordinating with Washington to this end, Seoul officials said. He proposed a timeline to realize denuclearization within Trump’s first term as president, which ends in January 2021, according to Chung.

In turn, Trump told Kim to “take your time” on denuclearization during a rally in Montana on Thursday, indicating that he was pleased with the North Korean leader’s recent positive messaging.

Trump noted that Kim had revived his “faith” in him last week with an expressed commitment to denuclearize during his “tenure” as president. “We have a good feeling,” Trump said. “He likes me, I like him.”

While sanctions on North Korea will remain in place, Trump said, “I respect him, he respects me. And I think something is going to happen.”

Biegun’s visit is seen as an opportunity for Seoul and Washington to coordinate and fine-tune their negotiating strategy ahead of President Moon Jae-in’s third summit with Kim set to take place from Sept. 18 to 20 in Pyongyang. It also leads to anticipation that Pompeo might reschedule a fourth trip to Pyongyang.

Biegun arrived at Incheon International Airport Monday afternoon. On his schedule was a dinner meeting with his South Korean counterpart, Lee Do-hoon, the special representative for Korean Peninsula peace and security affairs. He told reporters upon his arrival that he was looking forward to discussing with South Korean officials how to “make progress in denuclearization and bringing the stable peace to the Korean Peninsula.”

The two envoys had their first phone conversation on Friday evening, ahead of Biegun’s visit.

South Korea’s Ministry of Foreign Affairs said that they agreed to “work closely together to achieve tangible progress toward denuclearization and to build peace and prosperity on the Korean Peninsula” through “ironclad coordination” between Seoul and Washington.

On Tuesday, Biegun plans to meet with Foreign Minister Kang Kyung-wha, and Unification Minister Cho Myoung-gyon, who handles relations with the North. Biegun is also expected to visit Moon at the Blue House.

Biegun stepped down as vice president of international governmental affairs at Ford Motor at the end of last month after Pompeo appointed him as the special envoy for North Korea, a post left vacant after career diplomat Joseph Yun retired in early March.

His first Asia trip since the appointment will also take him to Tokyo and Beijing. He is set to be accompanied by Mark Lambert, the acting deputy assistant secretary for Korea.

However, Christopher Ford, assistant secretary for international security and nonproliferation, was not included in the visiting U.S. delegation despite expectations that he might visit this week. Ford is considered a hard-liner on North Korea, having worked under John Bolton during the George W. Bush years.