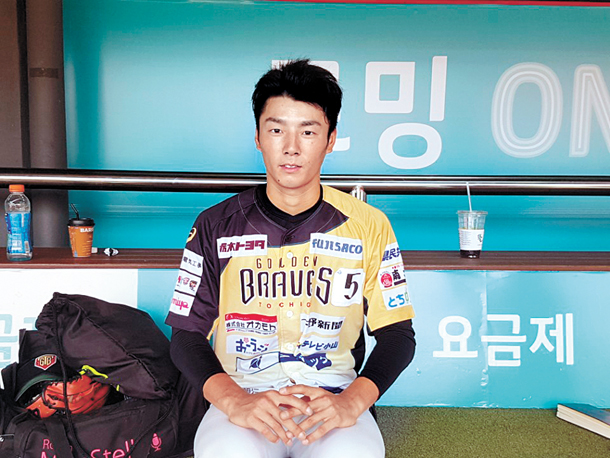 Han Seon-tae poses for a photo in the dugout during the KBO minor league returnee tryouts at Suwon Baseball Stadium on Aug. 20. [ILGAN SPORTS]

Like most careers, there are certain qualifications that KBO players need to have. First comes a high school baseball career - every domestic player learns the ropes in the school leagues. Many KBO stars then get drafted straight out of school, while some may go on to play in college or in the Futures League before they reach the top teams. Typically, the only exception to this career path is the few players who go straight from high school to the United States.

This tried and tested route has worked for every Korean baseball player for the last 36 years - until now. On Monday, Han Seon-tae became the first player in KBO history to be drafted despite not playing ball in high school.

Han, a pitcher who plays for a Japanese independent league club, wasn’t able to attend the KBO rookie draft on Monday as his season in Japan only ended on Sunday.

As a result, Han had to sit at home constantly refreshing his web browser to see if his name came up.

By the ninth round, Han had given up hope.

“If I do get drafted, I thought it would be somewhere in the 10th round,” Han said. “Despite this, when my name wasn’t called until the ninth round, I thought it was over. But starting in the 10th round, I saw a lot of requests for a timeout so I started to get excited. Then when the LG Twins said the Japanese independent league, I felt that it was me because Ha Jae-hoon and I were the only two contenders that play in the league.”

Han was drafted in the tenth round by the LG Twins, becoming the first domestic player with absolutely no high school or college experience to ever be drafted into the KBO.

“I still can’t believe it,” Han said. “They’ve given me a chance. So I need to work harder and not disappoint them.”

As he watched the game, young Han decided that he wanted to be a baseball player. He quickly headed to Bucheon High School in Gyeonggi, the closest high school to his home with a baseball team, to seek a spot on the squad.

But Han had fallen in love with baseball and he wasn’t about to give up. The young pitcher tried out for the independent Goyang Wonders, but failed to make the cut.

After a year with the Paju Challengers of the Korean independent league, Han moved to Japan to join the Tochigi Golden Braves at the start of this season.

Han’s two seasons in organized clubs with some level of coaching have seen him improve dramatically, with his pitching speed increasing from 110 kilometers (68 miles) per hour to 140 kilometers per hour on average.

But it wasn’t until the KBO foreign league returnee tryouts on Aug. 20 that Han started to get noticed by KBO scouts.

In addition to his interesting baseball resume, Han showed his potential of pitching almost 150 kilometers per hour.

Although Han said he was getting worried about not getting drafted by the ninth round, he wasn’t discouraged about it as he said, “I was going to tryout [in the professional league] until next year.”

“He has very little experience, but he has nice pitching form and can throw various pitches, so we believed that he has potential,” said Yang Sang-moon, the general manager of the Twins. “We also have expectations.”

Han is determined to learn and develop into a better player.

“I’m excited to join LG and see what I can learn,” Han said. “Since I started late, my love for baseball grows bigger every year. When a coach teaches me something, it’s fun because it’s all new to me.”

As a sidearm pitcher, Han’s role model is the Kia Tigers’ Lim Chang-yong, the oldest active player in the KBO.

In addition to his future plans in the KBO, Han didn’t forget to thank the Paju Challengers, the first team he joined in 2017 to start his baseball career. Now that he will finally make his debut on the professional league, Han hopes to be a role model for players who have faced a similar struggle.

“Up until now, my goal was to join a professional team,” Han said. “Now, my dream is to play in a KBO game. Once I achieve that, I probably won’t have to think of another dream, but I just want to continue playing in the KBO without getting injured. Since I’m the first non-player to get drafted, I want to open up opportunities for future non-player draftees. To do that, I’ll have to play well.”