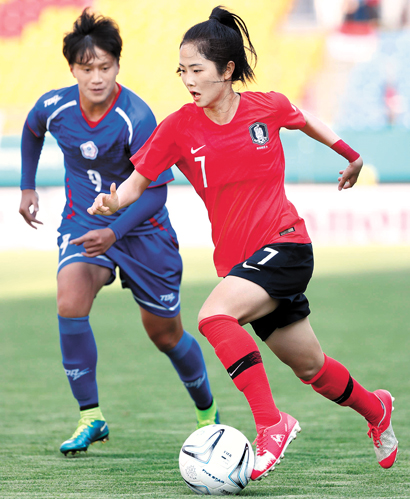 Lee Min-a, right, dribbles during Korea’s Group A match against Taiwan at the 2018 Asian Games at Gelora Sriwijaya Stadium in Palembang, Indonesia, on Aug. 16. [YONHAP]

When Ahn played for the national team, he worked hard to get recognized as a football player, rather than just a handsome face. Ahn cemented his reputation as a talented forward at the 2002 FIFA World Cup, scoring three goals.

“Ahn Jung-hwan said he worked harder to be recognized for his football skills than his appearance,” Lee said. She’s received nicknames like “football idol” from fans enamored with her looks.

But at the 2018 Asian Games, Lee got her chance to make a name for herself on the pitch.

At the Asian Games, the Korean women’s football team finished with the bronze medal after losing 1-2 to sixth-ranked Japan on Aug. 28. While Japan held a 1-0 lead, Lee scored a header to equalize the score in the 68th minute.

After scoring a header, Lee ran to her teammates in tears, thinking that Korea had a chance to win the match. While Korea was losing 1-2, Lee got another chance to score an equalizer in the penalty box, but her shot was blocked.

“The player in front of me was my teammate in the Japanese club,” Lee said. “I was trying to get a penalty kick by tripping over her, but I passed her. Right when I took the shot, I had a cramp on my leg, so I couldn’t make a full shot.”

Japan got ahead of Korea with an own goal by Lim Seon-joo.

“It wasn’t Seon-joo’s fault,” Lee said. “Earlier, I couldn’t keep my goal chance alive, and it’s our fault. When I started thinking that Seon-joo had to take all the responsibility, I was tearing up after the match.”

After a disappointing lost to Japan, Korea defeated Taiwan 4-0 in the consolation match to finish with a bronze medal. Lee scored one of Korea’s four goals in the match.

Lee first established herself after leading the national team to a runner-up finish at the 2015 East Asian Football Championship.

Lee moves quickly across the field despite her height of just 1.58 meters (5 feet 2 inches).

Lee’s occasional posts of her everyday fashion on social media have grown in popularity. She now has about 135,000 followers, including plenty of teenage boys and middle-aged men, on her Instagram account, @mina_world_. When she transferred to Kobe Leonessa in December 2017 after leading Incheon Hyundai Steel Red Angels to five straight WK League victories, she started to become popular in Japan as well.

“After transferring to Japan, I missed two months due to an ankle injury,” Lee said. “A lot of the Japanese fans wore my uniform and encouraged me.”

Now, football fans don’t just compliment Lee’s pretty face. Rather, many fans see her as a player whose football ability flew under the radar because of her good looks.

“It is overwhelming for my appearance to get more attention than football, but that’s something I need to overcome,” Lee said. “I believe that my hard work will pay off.”

After the 2018 Asian Games, the women’s football team received a lot of compliments for playing well despite losing to Japan.

Lee and the women’s team, however, weren’t satisfied with the results, as their goal at the Asian Games was to change the color of the medal to gold. In recent years, the Korean women’s football team racked up significant achievements but hardly received any attention from fans compared to the men’s football team, which hasn’t played well recently.

Lee has now set her sights in the 2019 FIFA Women’s World Cup in France. It will be Lee’s first-ever World Cup, as she wasn’t able to compete in 2015.

“Now it all comes down to the result,” Lee said. “Our goal is to pass the first knockout stage and reach the quarterfinals at the World Cup.”