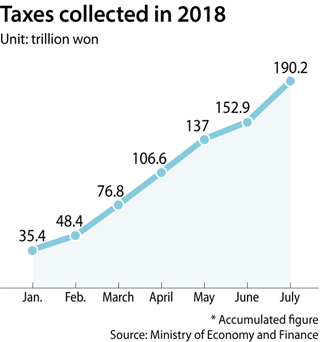 The government’s tax collections as of July were up 12.7 percent from a year ago largely thanks to strong performances by Korean companies and a booming real estate market.

In those first seven months, a total of 42.5 trillion won in corporate tax was collected, 7.7 trillion won, or 22 percent, more than a year ago thanks to healthy corporate profits, particularly at IT companies such as Samsung Electronics. Semiconductor sales have been particularly strong and analysts expect the company to report a record quarterly operating profit in the third quarter. A market consensus says Samsung will have revenues of 65 trillion won in the third quarter and an operating profit of 17 trillion won.

The corporate tax collected is 67.4 percent of this year’s target.

During the same period, the government collected 51.5 trillion won in income taxes, 6.9 trillion won, or 15.4 percent, more than a year ago. It is believed that income taxes were buoyed by a robust real estate market. Income taxes have already reached 70.6 percent of the yearly target.

In July alone, the government collected 33 trillion won in taxes, which was 2.2 trillion won, or 7.1 percent, larger than a year ago.

The swelling coffers have given the government the confidence to propose a massive budget for next year.

At the end of August, the government proposed a 470.5 trillion won budget for next year, a 9.7 percent, or 41.7 trillion won, increase from this year’s budget. That is the sharpest increase in nearly 10 years. The budget includes heavy spending on jobs, welfare and health.

However, there are growing doubts about tax collections continuing to rise due to an unfavorable job market, demographic changes and a global trade war that could affect Korea’s exports.

“[The ministry] is closely monitoring risk factors, including the recent jobs situation as well as other external factors such as the trade conflict between the United States and China, while planning to maintain our fiscal plan of actively contributing to policies that would improve jobs, innovative growth and macroeconomic vitalization,” the ministry said in a statement.