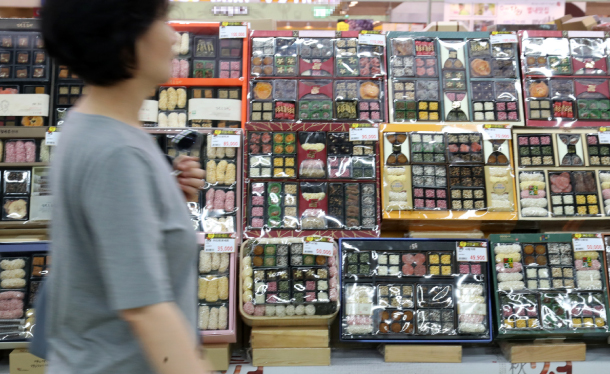 A consumer passes by the Chuseok gift section at a discount chain in Seoul on Monday. [YONHAP]

With Chuseok less than two weeks away, supermarkets and department stores are once again filling their shelves with gift sets for the harvest festival. This year, shoppers are on the hunt for traditional favorites, agricultural goods and premium items. 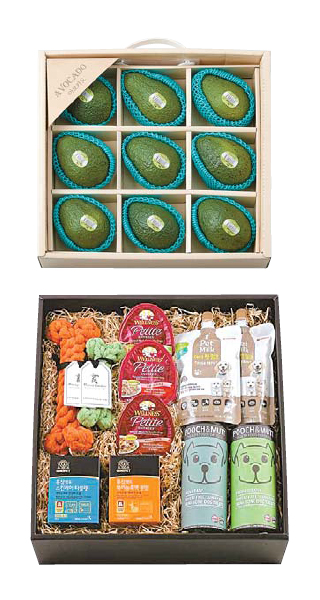 Sending gift boxes to family and colleagues is a long-standing tradition for the Chuseok and New Year holidays in Korea. For decades, high-quality fruit like apples and pears and meat and fish like dried corvina and hanwoo, or Korean beef, were considered staple holiday presents. Their popularity waned in recent years as consumers shifted toward more exotic items like lobster and truffles.

Sales records of pre-orders at local retailers show that the old agricultural favorites are making a comeback this year. At Emart, which took pre-orders for its gift sets between Aug. 2 and Sept. 6, fruit was surprisingly popular - apples and pears sold 148.5 percent more than last year. Dried persimmon, a popular fall snack and a favorite Chuseok gift, also sold twice as many sets compared to last year.

A similar trend was found at other discount chains. Lotte Mart saw pre-orders of gift sets of health products rise 53.3 percent year on year in the last month. In recognition of such demand, Homeplus plans to extend the range of health-related gifts to 56 different sets this year from 42.

“Going retro has been a trend in many fields recently - it seems like it has reached the realm of gift sets too,” Emart said in a statement.

Like last year, there were also indicators that a lot of shoppers are still being careful to keep their purchases below the bar set by the antigraft law, although this year spending was slightly more generous thanks to the regulation being relaxed in January to raise the ceiling on agricultural gifts from 50,000 won to 100,000 won.

Lotte Mart is selling avocado gift sets. A set of nine avocados will sell for 34,900 won starting from Thursday. Galleria is offering gift sets filled with premium items for pets, like a leash from a luxury German brand and a leather bag. Prices range from 130,000 won to 210,000 won.