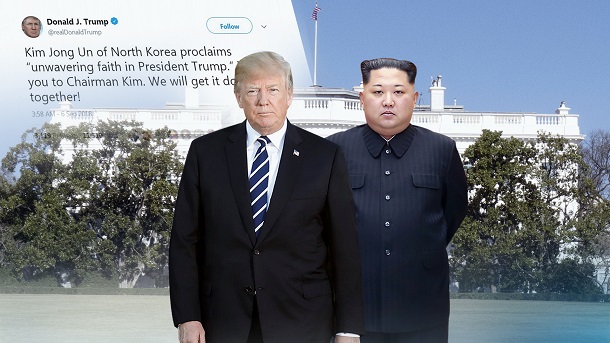 WASHINGTON - U.S. President Donald Trump has received a letter from North Korean leader Kim Jong-un calling for a second meeting between the two, and planning is already under way, the White House said Monday.

Trump said last week that he is expecting a letter from Kim amid stalled negotiations to dismantle the regime's nuclear weapons program.

She said the U.S. is "open" to a second summit and talks are under way to coordinate it.

"We will let you know when we have further details," Sanders said when asked if the meeting could take place in Washington. "But certainly, something that we want to take place and will -- already continue to work on making that happen."

Trump and Kim held their first summit in Singapore in June, and North Korea committed to work toward "complete denuclearization" of the Korean Peninsula in exchange for security guarantees from the U.S.

But negotiations to implement the deal have appeared to hit an impasse. Washington demands a full inventory of Pyongyang's nuclear arsenal, while the communist nation insists on first declaring a formal end to the 1950-53 Korean War, which ended with an armistice.

South Korean officials met with Kim in Pyongyang last week to arrange a third meeting between South Korean President Moon Jae-in and the North Korean leader. The delegation said Kim reaffirmed his commitment to denuclearizing the Korean Peninsula and expressed his desire to resolve the issue before the end of Trump's first term in early 2021.

Trump welcomed the remarks, declaring on Twitter: "We will get it done together!"
The Trump administration has touted a number of North Korean actions as evidence of progress toward the dismantlement of the regime's nuclear and ballistic missile programs.

Sanders reminded reporters that the North has stopped testing nuclear weapons and ballistic missiles, released American prisoners and returned what is presumed to be the remains of American soldiers killed in the Korean War.

And as noted by Trump, last weekend's military parade in Pyongyang did not showcase intercontinental ballistic missiles capable of reaching the U.S.

"We consider that a sign of good faith," Sanders said. "And again, the letter from Kim Jong-un to the president certainly showed a commitment to continuing conversations, continuing to work on the progress that they have had since their meeting just a few months ago. And also, a continued commitment to focus on denuclearization of the peninsula."

Earlier, there was speculation that Trump and Kim could meet on the sidelines of the United Nations General Assembly in New York later this month. The reclusive North Korean leader has not confirmed his participation in the international gathering.

Sanders said she had no specifics on the exact timing of the second summit.

Trump has expressed optimism about the prospects for North Korea's denuclearization. But last month he cited a lack of progress toward that goal in canceling a planned trip to Pyongyang by U.S. Secretary of State Mike Pompeo.

Pompeo himself has struck a more cautious tone, saying last week that "there is still an enormous amount of work to do."

"We're still waiting for them," he said. "Now the possibility of another meeting between the two presidents obviously exists, but President Trump can't make the North Koreans walk through the door he's holding open. They're the ones that have to take the steps to denuclearize and that's what we're waiting for."