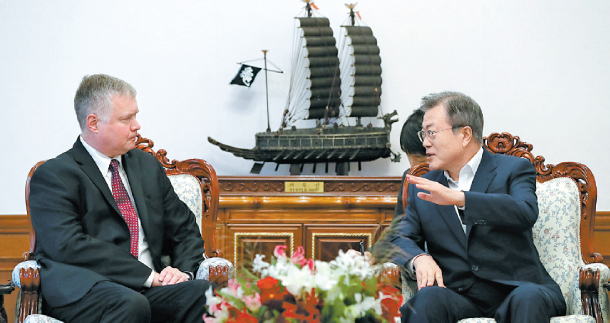 Sarah Huckabee Sanders, the White House press secretary, confirmed that Trump had received a letter asking for a meeting from Kim, calling it “very warm, very positive” in a press briefing in Washington.

“The primary purpose of the letter was to request and look to schedule another meeting with the president, which we are open to and are already in the process of coordinating that,” she continued. The request comes three months after Kim and Trump’s historic June 12 summit, after which denuclearization negotiations hit an impasse.

The letter from Kim was delivered to Trump following a visit by South Korean President Moon Jae-in’s special envoy and national security adviser, Chung Eui-yong, to Pyongyang on Sept. 5, and a week before an inter-Korean summit is to take place. In his meeting with Chung, Kim proposed to realize denuclearization within Trump’s first term as president, which ends in January 2021.

The following day, Kim’s missive was delivered in the truce village of Panmunjom on the inter-Korean border and conveyed to U.S. Secretary of State Mike Pompeo, who passed the letter on to the president. Ahead of the first-ever North-U.S. summit, Chung also traveled to Pyongyang and met with Kim as Moon’s special envoy in early March and then conveyed the North Korean leader’s request for a summit to Trump in a visit to Washington afterward.

Trump accepted Kim’s proposal on the spot, much to the surprise of his aides, eventually leading to the summit with Kim three months later on Sentosa Island in Singapore.

Sanders noted that North Korea’s military parade on Sunday, marking its 70th founding day anniversary, “for once, was not about their nuclear arsenal,” which she said could be considered “a sign of good faith.” In an indication it was serious about returning to negotiations with the United States, North Korea did not show off any intercontinental ballistic missiles, or ICBMs, in the military parade, as it has in previous years. This was a move Trump praised in a tweet on Sunday.

Sanders continued, “This letter is just further indication of the progress that we hope to continue to make.” The letter from Kim, she said, “certainly showed a commitment to continuing conversations” and a “continued commitment to focus on denuclearization of the peninsula.”

On Chinese President Xi Jinping’s role in putting pressure on Pyongyang, Sanders said, “Frankly, we’d still like to see them step up and do more,” and went onto say that Washington will “continue to hopefully work with President Xi and his team and his administration to continue making progress.”

On Aug. 24, Trump abruptly canceled a planned trip to Pyongyang by U.S. Secretary of State Mike Pompeo and Stephen Biegun, the U.S. State Department’s new special representative for North Korea, citing a lack of “sufficient progress” in denuclearization talks. Trump blamed China in part for stalled denuclearization negotiations with the North because of the U.S.-China trade war.

But Sanders said that “other steps have been taken” by the North to show progress.

“Ultimately, it’s always going to be when you can have the two leaders sit down, particularly from the North Korean side, as we know most of the decisions are going to be have to run through Kim Jong-un,” said Sanders. “We think it’s important, and we’re glad that we’re making progress.”

While she did not confirm if a second summit would take place in Washington, Sanders added it is “certainly something that we want to take place, and we’ll already continue to work on making that happen.” New York was earlier suggested as a potential second summit location on the sidelines of the upcoming UN General Assembly session, but it’s now considered unlikely.

John Bolton, the White House national security adviser, was more cautious about another Trump-Kim summit on Monday but did not reject Kim’s proposed timeline of around two years to denuclearize.

“Now the possibility of another meeting between the two presidents obviously exists, but President Trump can’t make the North Koreans walk through the door he’s holding open,” he said. “They’re the ones that have to take the steps to denuclearize, and that’s what we’re waiting for.”

Bolton gave a speech at the Federalist Society in Washington in his first major public appearance since he took the post as national security adviser in April and was asked by a reporter where the negotiations with Pyongyang stood.

Considered a hard-liner on North Korea, Bolton has previously claimed that most of the country’s nuclear and ballistic missile programs could be dismantled “within a year.” In an interview last month, he further suggested that the one-year timeline had been proposed by Kim Jong-un during his summit with President Moon on April 27 in Panmunjom.

Bolton clarified on Monday that Kim had “committed in April to South Korean President Moon Jae-in that he would denuclearize” and “do it quickly.”

“[Kim] said we can do it in two years,” said Bolton, and in turn, President Moon suggested to Kim, “Why don’t we do it in one year.” Moon later relayed this to Trump, according to Bolton.

“Kim Jong-un said we’ll do it in one year, so that’s where the one-year timetable comes from for those who are truly interested,” Bolton continued. “I thought they could do it even more quickly than that but one year is not bad. We’re still waiting for them.”

While Bolton said he didn’t think Kim Jong-un would attend the United Nations General Assembly session later this month, he was quoted as saying by Voice of America, “the possibility of meeting later is always there.” Moon and Trump are set to meet on the sidelines of the UN General Assembly in New York.

Bolton held a second phone conversation with Blue House national security adviser Chung Eui-yong since his return from Pyongyang Monday evening local time. Chung had returned from a trip to Beijing to brief Chinese officials Saturday on his Pyongyang visit.

The announcement of a second summit in the works leads to interest in seeing if a fourth trip to Pyongyang by Secretary of State Pompeo will be rescheduled. It would also indicate there has been some headway on a deal in which North Korea could declare its nuclear arsenal and test sites for a declaration to formally end the 1950-53 Korean War, which technically concluded with an armistice rather than a peace treaty.

The two sides had “in-depth” discussions about the Korean Peninsula situation including on the outcome of Moon’s special envoy’s visit to Pyongyang last week.

Biegun said to Lee there is “a tremendous opportunity,” adding, “This is the beginning. So what we need to do is to finish the job.”

He later paid a courtesy call on President Moon at the Blue House.