Authorities continue to check for MERS

Authorities continue to check for MERS 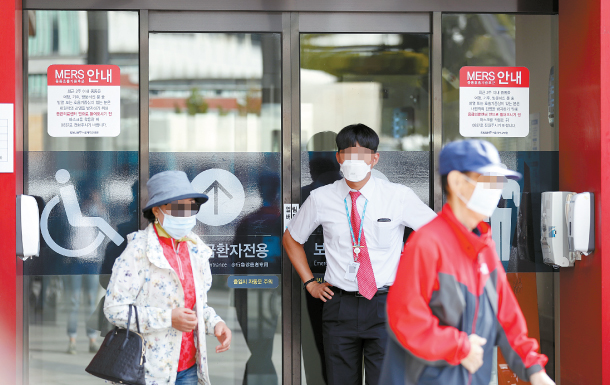 The entrance to the emergency ward of Seoul National University Hospital, where a MERS patient has been hospitalized for treatment, on Tuesday. [YONHAP]

After a 61-year-old Korean man returned from a trip to Kuwait on Friday, he immediately got into a cab and admitted himself to a hospital complaining of diarrhea. He became the country’s first case of Middle East respiratory syndrome (MERS) in three years since a deadly outbreak took the lives of 38 Koreans.

The taxi driver who transported the patient assured health authorities that he had not taken any other passengers, but the Korea Centers for Disease Control and Prevention (KCDC) revealed on Monday that he had given 23 more rides afterward.

“We ran through the records of the cab’s credit card machine and found 23 payments for rides after he dropped off the man at the hospital,” said Lee Sang-won, head of the emergency response team at the KCDC.

Lee did not say whether the cab driver would be punished for lying. After the credit card records were revealed, the driver told health authorities that he did not have additional customers who paid with cash, according to the KCDC.

The revelation comes as the government is scrambling to locate individuals who might have come in contact with the patient on the plane or at the airport. The cab driver has been asked to stay at home for two weeks, the maximum incubation period for the MERS virus, and the KCDC has identified the credit card owners and asked them to report any possible MERS symptoms.

The MERS coronavirus spreads via respiratory secretions, usually through coughing. Its mortality rate is around 35 percent, according to the World Health Organization, and there is no vaccine for it. A deadly outbreak in Korea in 2015 killed 38, infected 186 and led to the quarantine or isolation of 16,700 who had close contact with patients. It was the largest outbreak of the virus outside the Middle East.

As of Tuesday, the KCDC has identified 439 people who might have had contact with the patient, mostly passengers who were on the same flight as him. The 61-year-old man has been in quarantine since returning from his trip to Kuwait on Friday. He was diagnosed on Saturday.

Of the 439 people, the KCDC said 21 had close contact with the man and they have been asked to remain at home for up to two weeks. These individuals include his wife, the cab driver, airport staff, plane crew and hospital staff.

Local government officials said they plan to contact the 439 people regularly throughout the day to check for any symptoms of MERS, which include fever, coughing, shortness of breath, pneumonia and diarrhea.

Learning from the mishandled 2015 outbreak, the KCDC is taking no risks and checking in with the 23 passengers who took the cab after the patient. But Jeon Byung-ryul, a former KCDC director, said the likelihood of the driver spreading the virus to other passengers is low.

“Our experience in 2015 tells us that the virus usually spreads in hospitals to patients who have weak immune systems due to their underlying conditions,” Jeon said on a CBS radio show on Tuesday. “We didn’t have a single case of infection among those who were identified to have possibly had contact with infected people outside of hospitals.”

Jeon noted the 2009 swine flu case as another example of an outbreak contained mostly in hospitals. “The swine flu virus is more infectious than the MERS virus,” he said, “but a lot of people who got on the same bus as those infected with swine flu didn’t get infected.”

Yet another example, he said, are two cases of MERS in the United States in 2014. “The U.S. Centers for Disease Control and Prevention inspected all the people who were on the same planes as the two infected people, but it did not find a single person infected just because they were on the same flights,” he said. “Looking at these records, the possibility of these people catching the virus by riding in the same vehicle can be said to be quite low.”

Among those who were on the same flight as the patient, 115 were foreigners, and of them, 64 have been confirmed by authorities to be in Seoul. The city government said on Tuesday that it was able to get in touch with 44 of them and informed them that they would be contacted regularly throughout the day for up to two weeks to see if they show any symptoms of MERS.

“We will try to reach the remaining 20 in the city,” Na Baek-ju, head of the citizens’ health bureau in the Seoul government, said in a news conference at City Hall on Tuesday. “We are cooperating with local district offices and also embassies to try to contact these foreigners.”

About 50 foreigners who were on the same flight as the infected man are believed to be staying outside of Seoul, and authorities are trying to identify their whereabouts, the KCDC said on Monday.

The Seoul Metropolitan Government has provided a number of briefings since the MERS case was confirmed on Saturday, but there have been some inconsistencies with some information pushed by the central government.

“The patient said he visited a hospital in Kuwait twice,” an epidemiologist affiliated with the Seoul government said in a meeting at City Hall with Mayor Park Won-soon that was broadcast live on his Facebook account on Sunday. But the report varied with the KCDC’s account, which said the man visited a hospital in Kuwait just once when he was there from Aug. 16 to Sept. 6.

The epidemiologist also said that the man asked his wife to come pick him up at the airport but told her to wear a mask. And instead of getting in the car with his wife, the man called a cab to go to a hospital in southern Seoul - information that the KCDC had not revealed at the time.

After the City Hall meeting was broadcast live, the public began to question if the man had known when he arrived at the airport that he might have MERS and intentionally did not tell a quarantine official at the airport.

The KCDC held a news conference on Monday to clarify that the man had visited a hospital in Kuwait twice and did ask his wife to wear a mask “because his acquaintance, a doctor, had advised him so when they talked before,” a KCDC official said. “But epidemiological surveys are not all about what the patient said - you need to match the statements with medical records and facts.”

Both the KCDC and Seoul city government denied that they were in discord regarding their epidemiological survey of the MERS case. “We are currently conducting the epidemiological survey together with the Seoul city government,” the KCDC official said. “It’s not that we have different information, but the KCDC was waiting to check the facts before making an announcement on the findings.”

“There is no discord with the health authorities,” a Seoul city official said in a news conference on Tuesday. “The purpose of the live-broadcast meeting on Sunday was for the mayor to receive updates and reports on the city’s response to the case.”