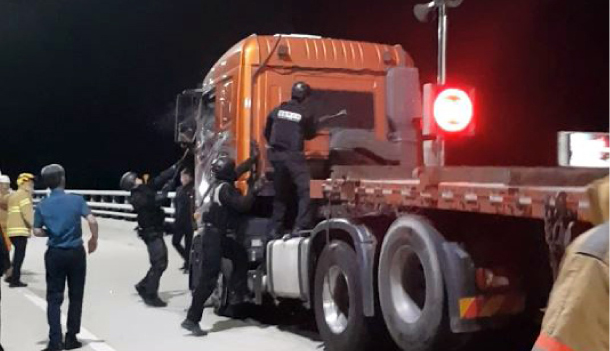 A SWAT team attempts to apprehend a truck driver on a bridge in Busan on Tuesday after the man dialed 112 and threatened to “cause an accident.” [YONHAP]

A 51-year-old truck driver was apprehended in Busan on Tuesday for calling 112 and threatening to “cause an accident” near a bridge under the influence of alcohol.

No one was injured, but the suspect’s truck and a police car were damaged during a five-hour standoff.

A Busan police officer said the man, whose identity was withheld, is in police custody on charges of drunken driving, traffic obstruction and interfering with police work. Authorities are planning to request a pretrial detention warrant after investigating his motives, the officer said.

The suspect told authorities that he was fed up with his job and low income. At one point during his altercation with police on Tuesday, the man tried to jump off the bridge, but officers physically restrained him.

The driver’s grudge, according to police, dates back to October 2015 when he purchased a 25-ton truck worth 250 million won ($220,000) with a loan to start a career as a freight driver. The man worked for a transportation company, but it was up to him to pay off the monthly interest, which reached into the hundreds of thousands of won, authorities said. On top of that, he had to pay nearly 1 million won to his company every month.

The suspect claimed he was restricted to work only in Busan, even though his company had branches all over the country, including in Seoul. That enraged him, police said.

On Monday night, the man called police and threatened to “cause an accident” on the Busan-Geoje Fixed Link. When officers arrived at the scene, the suspect rammed his truck into a police car. Police fired three live bullets and a blank toward the front tires.

After a nearly five-hour overnight standoff, the suspect threatened to commit suicide and opened his vehicle door at about 5 a.m. on Tuesday with the intention of jumping off the bridge, police said. A SWAT team made its way to the truck and suppressed him.

The suspect’s blood alcohol content level was 0.006 percent when officers handcuffed him. Police believe his level was around 0.12 percent five hours earlier when he called 112, high enough to revoke his license.

During questioning, the suspect admitted that he drank two bottles of soju at a location about 8 kilometers (5 miles) away from the bridge before the standoff, according to police.