August jobs report is most dismal yet

August jobs report is most dismal yet 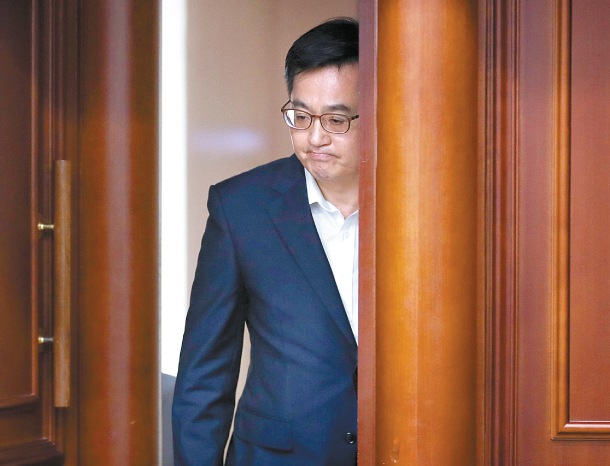 Economy and Finance Minister Kim Dong-yeon walks into an economic ministers meeting at the government complex in central Seoul on Wednesday where job policies were discussed. [YONHAP]

Workers in their 30s had trouble finding jobs and people in their 40s saw the biggest job losses for their age bracket in 26 years.

According to Statistics Korea, in August, the number of people working amounted to slightly less than 27 million.

The number of unemployed remained above one million for the eighth consecutive month, the first such run since 2000 after massive layoffs caused by the Asian economic crisis.

The total number of unemployed in August was 1.13 million, 134,000 more than a year ago. That’s a 13 percent jump. The newly lost jobs were mostly workers in their 30s through 50s. 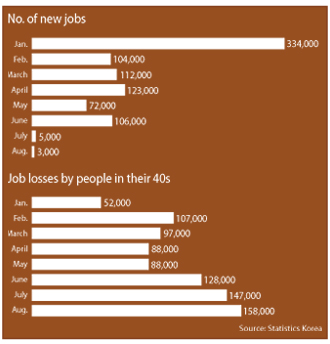 The jobs that were most affected were those that were heavily influenced by the minimum wage.

The wholesale and retail sectors, which includes supermarkets, convenience stores and other businesses that pay the minimum wage, saw the number of people hired drop 123,000 compared to a year ago, or 3.2 percent less.

The lodging and restaurant sector, which also pays minimum wage, saw its number of job losses nearly double compared to the previous month. In August there were 79,000 fewer jobs, which is more than the 42,000 jobs that vanished in July.

Workers in their 40s saw 158,000 jobs disappear, the largest number by age group. This is an increase from the 147,000 jobs lost in July and the largest shrinkage since December 1999, when 259,000 jobs were lost in the wake of the global financial meltdown. These are the same workers who were in their 20s when the Asian financial crisis hit in the late 1990s.

“These are people who entered the job market [for the first time] during the International Monetary Fund crisis when working conditions were unfavorable,” said Bin Hyun-joon, head of the job statistics department at Statistics Korea. “They have been [among all age groups] most heavily affected in every economic crisis.”

Bin said job losses among workers in their 40s are not limited to certain industries.

“When looking at workers in their 40s and 50s, the ratio of those who were only able to finish high school are relatively higher than their younger counterparts,” Bin said. Many have been working in temporary jobs, which are more vulnerable to job losses.

“For people in their 40s, there’s a relatively higher chance of losing their jobs when the job market is unfavorable,” Bin said.

The job market has been spiraling downward since a 52-hour work week was adopted in July on top of hikes in the minimum wage, which was raised more than 16 percent at the beginning of this year.

After seeing 334,000 jobs added in January, the figure dropped to around 100,000 a month from February to July. The situation took a sharp downward turn in July.

The disappointing jobs report forced the government to lower its target of new jobs for the end of this year in July from 320,000 to 180,000 - which may not be met.

The Blue House said the disappointing job report reflected an inevitable process the country is going through in overhauling its economic structure.

“It’s a point that comes with the changing of our economic structure,” said Kim Eui-kyeom, the Blue House spokesman, on Wednesday. “We’re going through a difficult time.”

“Overall the quantity and quality of jobs have improved, including the number of people employed, the employment rate, the increase in salaried employees and the increase of small businesses with employees,” Moon said.

On the following day, in a meeting with the press, the Blue House policy director, Jang Ha-sung, doubled down the income led growth policy.

The Blue House has repeatedly blamed Korea’s rapidly aging society and its low birth rate for the shrinking new jobs, denying claims that its economic policy - particularly the sharp hikes in the minimum wage - are causing the problems.

The Korea Development Bank, a state-owned think tank, rebuked that assertion. In a report released Tuesday, the KDI claimed that it was difficult to explain the significant drop in new hires in July on population changes and the current economic situation.

“The job statistics can’t be explained with the current economic situation,” said Kim Hyeon-wook, macroeconomic analysis and forecasting office director at the KDI. “It seems the minimum wage and the 52-hour workweek are having a negative influence and acting as a burden on the job market.”

Economy and Finance Minister Kim Dong-yeon, during an economic meeting with other ministers on Wednesday, once again said the government will work with the Blue House and the ruling Democratic Party to slow the minimum wage hike.