[Interview] Australia can give pointers on pension reform

[Interview] Australia can give pointers on pension reform 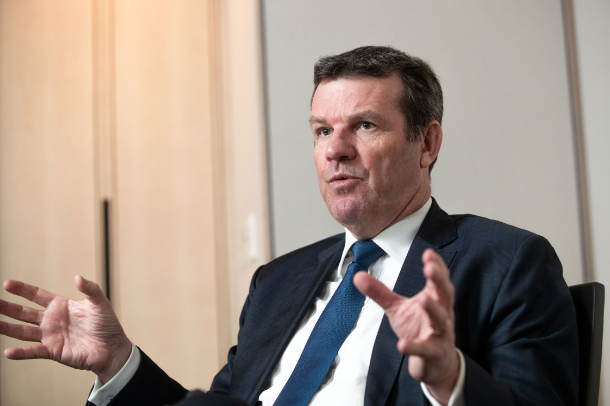 Brett Himbury, chief executive officer of IFM Investors, speaks at the Four Seasons Hotel in central Seoul during a visit to Korea on Tuesday. [IFM INVESTORS]

Worries about the state pension fund have grown in Korea, as it may run out of money as Korea’s population ages.

That has led many people to look for models abroad.

Some are pointing to Australia’s superannuation corporate pension fund. Put simply, the superannuation system mandates an employer put aside a set portion of workers’ salary as a pension fund to be managed by a board trusted by workers.

Australia is considered to have one of the most successful pension systems with healthy returns.

The Ministry of Employment and Labor proposed a bill aimed at introducing the scheme, but put the plan on hold.

In an interview with the Korea JoongAng Daily, Brett Himbury, chief executive officer at IFM Investors, discusses Australia’s pension system and the company’s business in Korea.

Q. Korea is starting a discussion on the adoption of an Australian type of superannuation pension program because of reduced trust in the state pension fund and poor returns on existing retirement pension programs. How do you see this trend in general?

A. I think it is good that Korea and many pension systems around the world continue to ask what we do. Because there’s a lot of money at stake and a lot of people who will be affected by this when they get to retirement. I think there are numerous positive attributes to the Korean pension system, because it has three pillars - a public system, occupational pension schemes and private savings to be added [as retirement pension funds]. But the Korean system and pension funds around the world could still benefit from a Master Trust system.

A Master Trust entity is governed by a single trustee board that is made up of a diverse range of highly experienced people who are individually motivated to focus on net returns for member beneficiaries. That structure has proven to be beneficial for working people.

The Labor Ministry withdrew its proposal aimed at introducing a superannuation fund earlier this year, saying Korea has an insufficient infrastructure to manage the program. Do you agree with that view?

If you think about Australia’s superannuation system 24 years ago, it was a nascent industry. We have made some mistakes, but we have learned from the mistakes. We have continued to improve and now it is one of the best-performing systems in the world. So, it is similar to a job. You are never quite ready for the job, but sometimes you just have to grow into it.

I think it started off as a hugely fragmented system and it has been increasingly consolidated. Australia had thousands of corporate funds but we have now got a few hundred funds. Those funds become bigger, more sophisticated, better governed, more powerful in exercising their pricing power and more global. If you look at our asset allocation before, it was not unlike many countries’ asset allocation around the world: bonds and listed equities, mainly local. But if you look at it now, it has evolved into being more global and far more diverse - less exposed to bonds and more unlisted and alternative assets.

If the bill passes, would IFM Investors be interested in running a pension fund in Korea - if there is no regulation against a foreign financial company?

No. We believe in focus. This is a complex business. In order to execute well, we got to be quite focused on being a world class institutional fund manager.

Transitioning into being a pension fund is challenging. A different strategy and an understanding of a different culture and operational requirement will be needed. We just want to remain focused on institutional fund management.

IFM Investors announced a plan to rebate management fees. Is this something IFM Investors has done for the first time? And what’s the purpose of the move?

The things that drove the rebate decision this year are, in essence, two-fold. One is our ownership. We are owned by investors and our sole purpose is to really focus on returns to our investors. The second factor that drove our rebate was a higher-than-expected performance by our team. Our investment returns across all asset classes have been very strong. As a result, support from our existing investors has grown, along with support from new investors.

IFM Investors opened an office in Korea last year. Who is the major target?

Our major client base is institutional investors. We really believe in the power of collective investing and long-term, responsible investment. We chose to only deal with long term institutional investors. Korean investors have been, like many pension funds around the world, largely domestically focused and they are increasingly now orientating themselves to global opportunities.