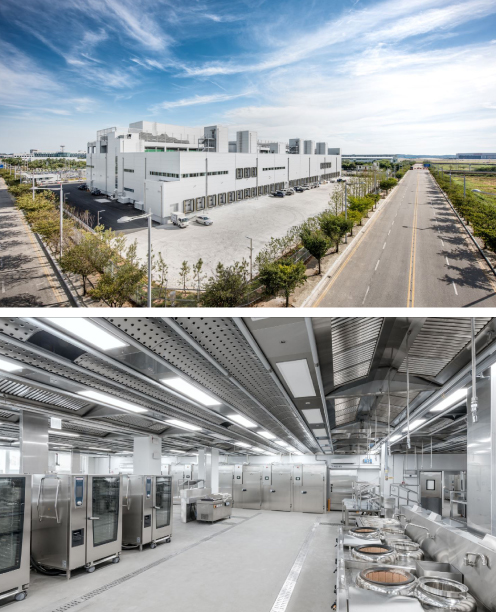 The exterior and interior of the newly built in-flight meal production factory for Gate Gourmet Korea, the new meal caterer for Asiana Airlines, located on Yeongjong Island, Incheon. The factory was licensed for operation by the Korea Customs Service last month. [ASIANA AIRLINES]

The first plane loaded with meals made by the joint venture between Asiana and China’s HNA Group was flight OZ731 that departed from Incheon at 7:30 a.m. Tuesday to Ho Chi Minh, Vietnam. According to Asiana, the new caterer supplied roughly 30,000 meals for 81 flights on Tuesday.

Gate Gourmet Korea was supposed to supply meals to Asiana from July, but was unable to do so after a fire broke out during the construction of its factory in March. The airline then inked a temporary three-month contract with smaller caterer Sharp DO & CO.

The decision was disastrous. Sharp DO & CO, a company that was only used to supplying about 3,000 meals a day, was unable to provide the roughly 30,000 meals that Asiana needed. On July 1, the day that Asiana ended its old supplier contract with Lufthansa subsidiary LSG Sky Chef and started working with Sharp DO & CO, 51 out of 80 of the airline’s international flights were delayed and 36 left without meals.

The situation got so bad that the 56-year old chief executive of one of Sharp DO & CO’s contractors died by apparent suicide the day after the no-meal fiasco began.

Though no suicide note was found, family members told police that he was under a lot of pressure trying to produce a higher-than-usual number of in-flight meals.

Though the meal situation slowly stabilized with Sharp DO & CO increasing production over the past two months, Asiana decided to end the contract earlier than expected to bring back a fuller in-flight meal service as soon as possible.

Even in September, Asiana’s in-flight meals had not fully returned to normal service levels. Business class meals that are normally served in multiple courses were still being served on single trays for some flights.

According to the airline, the caterer’s newly built factory on Yeongjong Island, the same island that Incheon International Airport sits on, is capable of producing up to 60,000 meals per day, more than enough to serve Asiana’s 32,000 to 35,000, the airline said.

“The two-story factory that covers 25,550 square meters [6.3 acres] is equipped with state-of-the-art facilities,” a spokesperson from Asiana said. “We hope to upgrade our meal quality using the new partnership with Gate Gourmet Korea.”