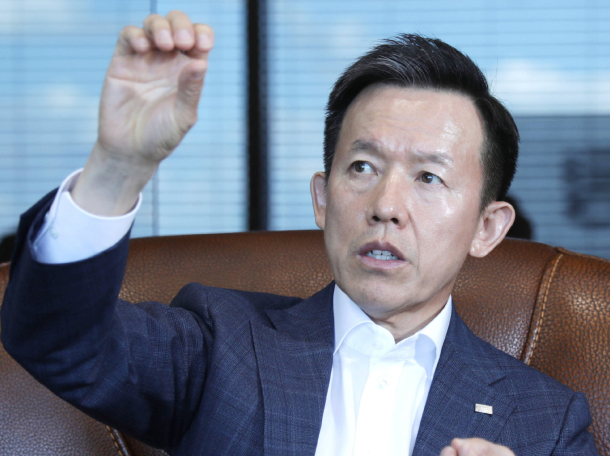 The chief executive officer of Mirae Asset Daewoo and senior vice chairman of the Mirae Asset Global Investment Group, Choi, 57, has a small frame but a piercing gaze hardened by decades of trading. Under the leadership of Choi and Chairman Park Hyun-joo, Mirae Asset grew into the first Korean investment bank to reach 8 trillion won ($7.09 billion) in equity.

Mirae Asset Global Investments was founded in 1997 and provides comprehensive financial services such as asset and wealth management, life insurance and investment banking. The firm was a pioneer in the financial market, introducing mutual funds to retail investors for the first time in 1998. It has since grown into a multinational conglomerate with a presence in over 14 countries.

It acquired Daewoo Securities in late 2015 to become the largest stock brokerage firm in Korea by market capitalization. Park stepped down as chairman of the domestic brokerage arm in May, leaving Choi to run all the domestic operations.

The JoongAng Ilbo interviewed Choi on Sept. 4 at the Mirae Asset building in central Seoul. Below are excerpts from the interview.

Q. It’s been almost two years since you’ve taken the helm of Mirae Asset Daewoo. Give us your insight into management this year.

A. We’ve assumed the top spot as the largest investment bank in the country after the merger with Daewoo Securities. Given the evolution of Korea’s industrial structure thus far, the capital market must now help other industries. Our expanded responsibilities have also increased our confidence. The global economic situation remains difficult, but I’m optimistic about our performance this year.

You’ve openly pronounced plans to make the Mirae Asset Daewoo into the greatest investment bank in all of Asia. Is this really feasible?

If you consider our total asset management and the size of our shareholders’ and customers’ equity, we’re already at second or third place in a number of fields in Asia. In order to achieve the dream of becoming the top investment bank in Asia and become something like Korea’s Goldman Sachs, we plan to expand our equity capital to 10 trillion won.

What the secret behind becoming the longest serving chief executive in the financial industry?

A chief executive must focus on setting up the corporate strategy, and what puts such blueprints into action is the internal system. Personnel management is critical to ensuring fluid internal communication. If directions aren’t enough, sometimes you have to show your workers through practice. That’s what it means to lead by example.

You’ve become a prominent figure in the financial industry despite not having an elite college background. Tell us more about this.

I had to take a year off high school after a sparring injury I received as a taekwondo athlete in middle school worsened. This also coincided with the May 18 Gwangju Uprising, and the social mood at the time led to me wander for a period. At that time, I even thought of going to missionary school to become a priest, but eventually decided against this after my family told me it would only be an escape from reality. I eventually entered Chonnam National University as a political science and international relations major.

Why did you decide to work in securities?

I took leaves from college three times to study for the civil service exam at a monastery, but failed every time. Then I met my wife who, at the time, was a dental student. I felt I needed a proper job in order to live up to being a dentist’s husband. At the time, Korea’s stock market index topped 1,000, and many of the country’s top brains were vying for jobs in securities.
After a desperate search, I was finally able to get my hands on a form and submitted my application. Luckily, I was accepted at one firm, where I met Chairman Park Hyun-joo, who had entered the company not long before me.

At the time, Chairman Park was the central office manager at Hanshin Securities, the forerunner of today’s Dongwon Securities. Together we made a name for ourselves in the industry. This experience eventually helped us to found Mirae Asset.

It was a time when securities trading was all done by hand. For someone like me, who knew nothing about the industry at the time, I had to struggle to survive, learning the job as I went. Like this, I eventually received my trading license and was even able to go on a training program at the heart of global finance — New York’s Wall Street. When I look back to that time, it reminds me that success is always possible if one strives hard and overcomes difficulties along the way.

Is there a catchphrase you have in mind when it comes to management?

Up until a few years ago, I kept a slogan hung up next to my office phone. It read, “Never lollygag during the good times.” I believe this phrase reflects the core of risk management.

Everything else about business is determined by a tripartite structure composed of cost, price and value. Price is determined by supply and demand, cost can be controlled by efficiency, and value can be raised by building trust. You mustn’t mistake prosperity for self-worth. To not lollygag means keeping a cool mind even when everything appears to be going well.

What would you say defines a strong organization?

I like the idea of focusing on one thing at a time. In our industry, this means concentrating on one client at a time. As a son of a farmer with seven siblings, I have always believed in living a diligent life to achieve success. Throughout my career, one thing that I have taken to heart is this idea of focusing on a single target. If we compare working with a single client to a dot on a page, you will find that, as you concentrate on that client, he will introduce you to other clients, and suddenly, the dot becomes a line, and eventually, a plane. The path to success is connecting these dots and making all these clients your resources to reach a higher plane.

Do you have a philosophy of management as a chief executive?

Top executives should always consider the leadership of Jesus Christ. His words have clear directions, telling us what to do in order to go to heaven. Likewise, I believe leaders must always present clear and simple instructions. Management summed up in a single word would be patience. When things aren’t going your way, it is important to value relationships with those who know you well and overcome the temptations that come your way. Once I received a scouting offer for a position with a 5 billion won salary. But I declined it, since I valued my relationships where I was.

It would be unwise of us not to ask an investment banking chief executive about investment strategies. What’s the secret to investing well in the stock market?

Invest like a hedge fund. One should always keep track of top global securities in addition to domestic ones. The answer is diversified investments based on different periods, prices, locations and assets. One should take also advantage of more intangible sentiment indices, such as knowing which stores are popular or what smartphone applications are in vogue at the moment.