Hong Seok-hyun, center, chairman of the Korea Peace Foundation and JoongAng Holdings, and Kim In-chul, to his left, president of Hankuk University of Foreign Studies (HUFS), gather with HUFS students and professors on Wednesday at the school’s campus in Dongdaemun District, eastern Seoul, after Hong delivered a lecture on building peace on the Korean Peninsula. [PARK SANG-MOON]

North Korea’s nuclear development program was based on Kim Il Sung’s “animal spirit” to find a way for the regime to survive at a tumultuous time, said Hong Seok-hyun, chairman of the Korea Peace Foundation and JoongAng Holdings, during a lecture on Wednesday at Hankuk University of Foreign Studies (HUFS).

Hong, who served as South Korean ambassador to the United States in 2005 during the liberal Roh Moo-hyun administration, told an audience of international students that the North Korean founder appeared to have sensed the importance of nuclear weapons in the mid-1980s as the North’s economy started to fall behind South Korea’s and as the Soviet Union began to crumble.

When the Soviet Union finally collapsed in 1991, Kim’s will to develop nuclear weapons solidified even more, Hong argued.

“I think there’s no better way to put it,” Hong said of his explanation that Kim’s animal spirit was the foundation of Pyongyang’s nuclear drive. Joan Robinson, a British post-Keynesian economist well known for her work on monetary economics, inspired his theory, he said.

When Hong was studying for his doctoral degree in economics at Stanford University in 1974, he once heard a lecture from Robinson, during which she said that entrepreneurs had “animal spirits” and it was that energy which motivated them to make investments.

Applying that to North Korea’s case, Hong, who served as President Moon Jae-in’s special envoy to Washington in May 2017, said Kim probably followed his own instincts as a leader when he decided to make becoming a nuclear power the national goal, even if that meant the country had to sacrifice millions of lives during the process.

Yet during the lecture, which was titled “Youth Odyssey for Peace on the Korean Peninsula,” Hong underscored that North Korea’s denuclearization was indispensable. Acknowledging the North as a nuclear state would only break the international order.

“If we acknowledge North Korea’s nuclear weapons,” he said, “then there’s no justification to oppose South Korean conservatives who would say we, too, should develop nuclear weapons. And what if Japan develops nuclear weapons? At a time when tension is flaring on the military front between the United States and China, if [the same situation occurs between] China and Japan, then Northeast Asia will be mired in an uncontrollable vortex.” 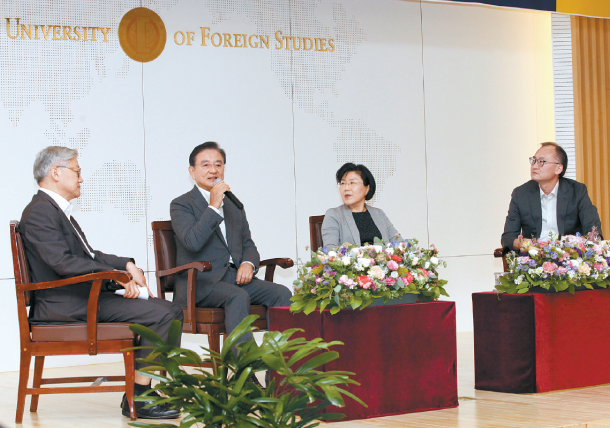 From left, Yun Duk-min, an emeritus professor of language and diplomacy at HUFS who previously served as chancellor of the Korea National Diplomatic Academy; Hong Seok-hyun, chairman of the Korea Peace Foundation and JoongAng Holdings; Choi Jung-hwa, president of the Corea Image Communication Institute and a professor at HUFS; and Hwang Jae-ho, a professor of international studies at HUFS, during a roundtable discussion after Hong’s lecture. [PARK SANG-MOON]

When asked by Hwang Jae-ho, a professor of international studies at HUFS and adviser to the National Security Office in the Blue House, about South Korea’s road map on the nuclear issue during Moon’s remaining time in office, Hong said it was pertinent for Seoul to keep pace with the international community.

“Looking back at last year’s situation, I think we wouldn’t have come this far if it weren’t for President Moon Jae-in’s creative efforts and his role as mediator” between Washington and Pyongyang, Hong said. Seoul’s efforts to boost economic and cultural exchange between Pyongyang - with the end goal of forming some kind of community between the two Koreas - can only succeed when they’re carried out along with progress in North Korea’s denuclearization, he said.

If the administration manages to communicate fluently with North Korea while being on the same page with the United States, Moon will be able to leave a mark in history within his five-year term, which ends in 2022, Hong said.

Yun Duk-min, an emeritus professor of language and diplomacy at HUFS who previously served as chancellor of the Korea National Diplomatic Academy, asked Hong how young adults should perceive the North.

“I think we have to see North Korea with a sense of affection,” Hong answered. “The North Koreans probably wouldn’t like it if I call it sympathy, but [we have to think about] why Kim Il Sung and his son wanted nuclear weapons so badly just as [former South Korean President] Park Chung Hee did. I think we have to try to understand how hard it is for them to give those up.”

Hong at one point noted Seoul’s lack of diplomats and said the country needed to at least double the number of envoys it currently has allocated for neighboring countries such as Japan, China, Russia and the United States.

“I briefly worked in the diplomatic scene, and what I realized is that we don’t need a few extra F-35 stealth fighters,” Hong said. Instead, raising the number of diplomats for each country nearby would be a smart way to save money, especially when we might have to pay a heavy cost for some kind of huge diplomatic mistake later, he said.

On stalled denuclearization talks between Pyongyang and Washington, Hong posited that the stalemate might have been caused by a lack of trust between the two countries. North Korea wants a formal end to the 1950-53 Korean War, which concluded with an armistice rather than a peace treaty, technically leaving both Koreas still at war. The United States has been demanding the North take more concrete steps toward denuclearization, such as disclosing a complete inventory of its nuclear stockpile and related facilities.

Noting that the Donald Trump administration agreed earlier this week to hold a second summit with Kim Jong-un, Hong said he looked forward to having both countries bridge their gaps during working-level discussions leading up to the leaders’ meeting and, during the process, building trust and finding common ground.

Citing a recent survey that showed South Korea’s younger generation was negative about cooperating with the North, Hong said it was the country’s mission to overcome inter-Korean issues and build peace.

“It’s not like we can detach ourselves from the peninsula and relocate to the middle of the Pacific Ocean,” he said.

One positive of building peace with the North is that if railways and roads between the two countries get connected, a project that is currently in the works, South Korea will rise to become a “continental gateway” for Asia, Hong said.

“It will open a new era for development, and we will be the ones benefiting from those amazing advantages,” he said. Hong mentioned the Busan Port and Donghae Port as possible key gateways for that rosy future.

Being economically connected with North Korea is crucial because the scenario would lead to new business opportunities for South Korean entrepreneurs and workers, Hong said, mentioning that the South had high dependency on foreign trade.

“We have North Korea, this devil-like country, as our brother. And what do we do with it? We have no other choice but to live with it,” he told students.

The North Korean nuclear crisis “is something your grandfathers and fathers couldn’t handle, but if you manage to get it worked out, South Korea will become the fifth- to sixth-largest economy in the world.”