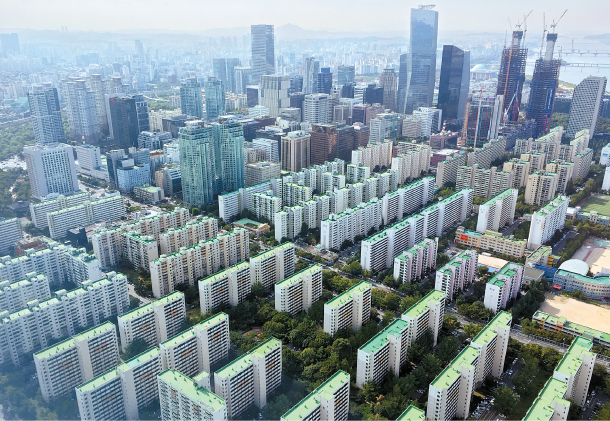 A view of Seoul from the skyscraper 63 Building in Yeouido, western Seoul, on Thursday. The government announced its toughest regulation that includes prohibiting mortgages to people who own two or more apartments in 43 areas designated as overheated. [YONHAP]

The government won’t allow new mortgages to anyone who owns more than two apartments in areas it designates speculative investment areas, which includes all of Seoul and Sejong.

Additionally, the maximum comprehensive real estate tax rate will be raised to 3.2 percent, 0.2 percent points higher than the 3 percent applied during the Roh Moo-hyun administration, for people who own more than three apartments or two apartments in speculative investment areas.


These were measures announced by the government Thursday, the latest in a series designed to cool the real estate market, which has shrugged off the earlier measures.

The government said the latest measures, especially raising taxes on property owners, were targeted at speculative investments and people who own multiple apartments.

“We have tried our best to protect those who own a single apartment to protect the real demand [by people who purchase apartments not for the purpose of investment but to live in them],” said Economy and Finance Minister Kim Dong-yeon at the government complex in central Seoul. He appeared with other chief economics-related ministers including Minister of Land, Infrastructure and Transport Kim Hyun-mee and Financial Services Commission Choi Jong-ku.

Economy and Finance Minister Kim said the government set three principles in coming up with the measure. 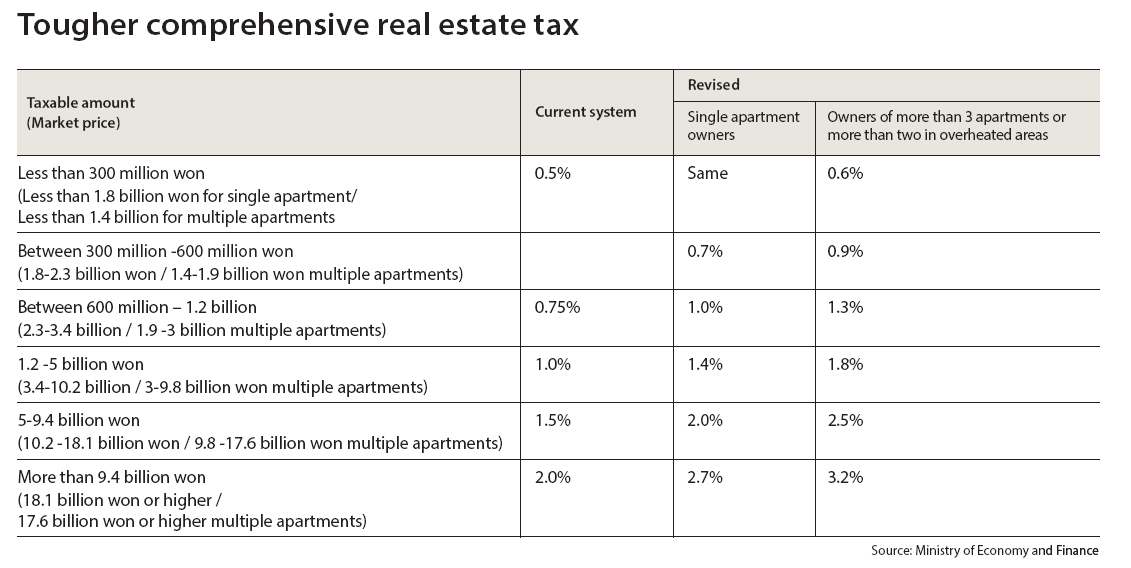 On top of prohibiting new mortgages in designated areas, the government will be applying a tougher loan-to-value ratio for people registered as being landlords of apartments whose government assessed value is less than 900 million won ($802,000). Currently banks could lend 60 to 80 percent of the value of the property. That ratio will be dropped to 40 percent. Additionally, these landlords will be barred from taking out fresh mortgages to buy apartments in the designated areas.

After the government tightened loan regulations last year, many people have borrowed mortgages after registering as being in the housing rental industry, which had laxer requirements to get loans.

“The reason the loan restrictions against multiple home owners have been added in the measure [today] is to prevent people from buying additional apartments other than the ones they plan on living in,” said Financial Service Commission Chairman Choi. “We can’t stop people with loads of money from buying apartments, but we are preventing the financial sector from supporting speculative investors.”

Currently, the government has designated 43 areas as speculatively overheated areas, including all of Seoul and Sejong as well as several areas in Gyeonggi and Busan.

The government has toughened comprehensive taxes as well.

The government kept the minimum tax rate, but other rates have been raised depending on how expensive the apartment is.

Currently a 0.5 percent tax rate is applied when the amount the government is taxing the apartment is less than 600 million won.

The new measure will keep the 0.5 percent rate for apartments which the government is taxing less than 300 million won.

But for more expensive apartments, the rate has been raised as much as 1.7 percentage points, raising the maximum rate charged on single homeowners to 2.7 percent from the current limit of 2 percent, which was applied for the last 10 years after being changed by the Lee Myung-bak administration.

Apartments that are less than 900 million won in government assessed value or whose market value is estimated at roughly 1.3 billion won are not subject to the comprehensive real estate tax.

Multiple homeowners and people who own two apartments in the speculative investment areas will be facing a tax rate between 0.6 percent and 3.2 percent with a 0.9 percent tax rate on the taxed amount between 300 million won and 600 million won.

With the changes in the comprehensive real estate tax rate, the government expects to collect 420 billion won in additional taxes next year.

The economy minister tried to ease concerns about any extra tax burden on families owning a single apartment.

“The comprehensive tax burden against those who own a single expensive apartment has been raised,” Kim said. “But when compared to those with multiple apartments, it is relatively weaker.”

He cited an example of an apartment whose market value would be 1.8 billion won, and the amount that is subjected to tax is 300 million won.

But Kim stressed that, for people who own more than three apartments or two in areas designated as overheated, the tax burden will increase sharply.

There have been growing concerns from homeowners whose apartment values have risen about being subjected to the comprehensive real estate tax. One of the reason the Lee Myung-bak administration lowered the rate was largely because retirees were slapped with heavy taxes just because they owned an apartment in Gangnam District in southern Seoul.

According to the real estate information provider Budongsan 114, the number of apartments whose values have risen to 900 million won has grown significantly since the comprehensive real estate tax was first adopted. Currently, there are 29,441 apartment units in Seoul whose government assessed value exceeds 900 million won - five-fold the 165,324 units in 2005.

Economy and Finance Minister Kim expressed confidence the latest regulations will cool off the market.

“The announcement of the measures is not the end but [I think] management going forward is important,” Kim said. “We will continue to monitor the situation closely and see if the [measures] are having effects in the field and if there are additional improvements that need to be made.”

The government, however, did not announce on Thursday where it would build 300,000 housing units in Seoul and its surrounding areas, including Gyeonggi. That will be revealed on Sept. 21.