Home is where the work-life balance is good

Home is where the work-life balance is good 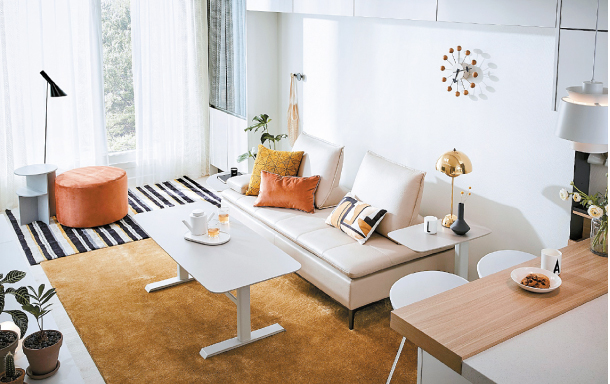 Hanssem’s example of an apartment for newlyweds includes white walls and furniture to give the illusion of a larger living space. [HANSSEM]

The growing emphasis on work-life balance in Korea is good news for interior decorators.

As more employees are spending time at home at the encouragement of their companies, interior decorators and furniture makers are seeing higher demand for their services and focusing on making the home as relaxing as possible.

There are several things driving this trend. In July, a new rule went into effect shortening the workweek to 52 hours for companies with more than 300 employees. Conglomerates have towed the government line, giving workers more days off, and with gross income per capita steadily rising, more Koreans have the time and money to spare on home decorating. The market size for interior design and remodeling was 28.4 trillion won ($25.3 billion) last year, according to the Construction Economy Research Institute of Korea, and the figure is expected to grow to 41.5 trillion won by 2020.

On Wednesday, Hanssem, Korea’s largest furniture and interior design company, announced the themes for its fall and winter collection - comfort and encouragement - based on the idea of spending more time in the home.

“We put a lot of thought into what the new role of the home should be in this transforming society,” said Kim Yoon-hee, a senior designer at Hanssem. “We believe the home is a place that comforts and encourages people when they’re tired, and so we have offered specialized spaces that cater to different members of the family.”

For newlyweds in small apartments, Hanssem recommends white walls and furniture to create the illusion of a larger living space. For families with young children, Hanssem proposes modular sofas - couches made of separate components that can be reorganized into different positions - to accommodate various occasions, such as playtime. For families with older children in middle or high school, the company is marketing living rooms and kitchens with more seating space to facilitate conversation between family members.

“Our company is working hard to lead the domestic home furnishing industry as the market is expected to grow with family incomes rising in Korea,” Kim said.

Swedish furniture giant Ikea’s first Korean store in Gwangmyeong, Gyeonggi, became such a hit with local consumers that the company opened a second store in Goyang last year and is planning to launch a third store in Giheung District in Yongin, Gyeonggi, next year.