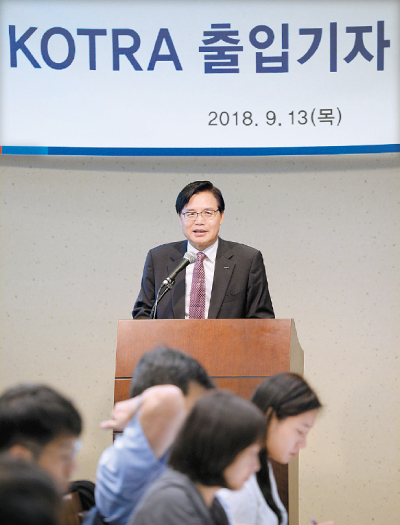 President Kwon Pyung-oh of the Korea Trade-Investment Promotion Agency (Kotra) expressed confidence on Thursday that Korea’s total exports will surpass the $600 billion threshold for the first time this year.

Kotra held a press event to share its outlook on exports for the year’s second half. The trade agency expects the year-on-year increase rate of exports between June and December to be slower than the 6.3 percent rate in the year’s first half.

Nonetheless, it gave a positive annual outlook that the goal of $600 billion is likely to be achieved thanks to a thriving IT market and a hike in oil prices. Korea’s exports between January and August totaled $339.8 billion, a 6.6 percent increase year on year and a record for the period.

“To reach $600 billion in annual exports this year, we need to export one percent more year on year in the remaining four months - I’d say that’s achievable,” said Kwon during the press event held in central Seoul. Last year, the amount of exports between August and December summed $198.7 billion with the total amount for the year at $573.7 billion.

“The agency receives [quarterly] outlooks from foreign buyers and the results for the third quarter are quite positive,” he added. “Figures for the fourth quarter are still being compiled, but internal reports from foreign offices so far look pretty good.”

Kwon expressed concern that the real difficulty in the global export market might start next year.

“There are so many factors that increase uncertainty in the global trade environment next year,” he said. “The biggest variable is the trade war between United States and China and how their relationship will affect the trade environment for other countries. If this goes in the direction of slowing down global trade, it will affect us and possibly expand trade protectionism to other countries as well.”

A former ambassador and chief of the trade promotion division at the Ministry of Trade, Industry and Energy, Kwon was appointed as Kotra’s head in April. At his inauguration event, he promised to create more jobs.