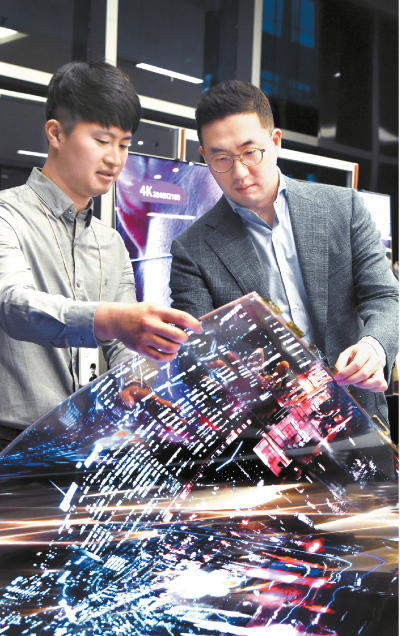 LG Group’s new Chairman Koo Kwang-mo made an official visit to the LG Science Park Wednesday afternoon, a move that signifies his intention to put technology development at the center of his future plans.

Wednesday’s outing was Koo’s first official appearance outside LG’s headquarters. Koo has remained a low profile since taking over in late June, focusing on making internal reforms after his adoptive father, and former chairman, Koo Bon-moo abruptly passed away the previous month.

Koo’s decision to visit the R&D cluster first signals his strong will to place technology development at the core of his future business plans. Internally, it sends the message that he is willing to push investment in research, following in the footsteps of his late father. The Science Park, which cost 4 trillion won ($3.5 billion) to build, was the pet project of the former chairman.

“The Science Park is an R&D mecca that will be responsible for LG’s future,” Koo said to senior executives at the site on Wednesday. “It will come to play a pivotal role in the fourth industrial revolution.”

Koo and the company’s senior staff discussed ways to enhance LG’s competitiveness in R&D. Artificial intelligence, big data, augmented and virtual reality were areas that they agreed to place at the top of the list of technologies that need to be developed.

Apart from affiliates developing their own technology, Koo also suggested that LG should seek out start-ups and smaller companies worldwide with high-level technology. In July, LG acquired ZKW, an Austrian company specializing in automotive lighting.

During his visit, Koo inspected some of the R&D projects at the park closely related to LG’s future growth. Among them were electric car components like laser headlamps and next-generation displays such as transparent and flexible organic light-emitting diode (OLED) screens.