Moon advises North to give up its nukes

Moon advises North to give up its nukes 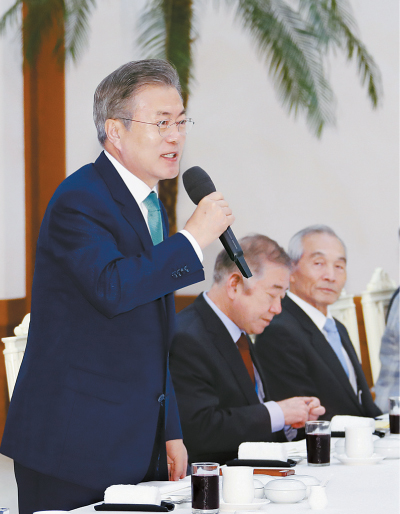 Moon stressed that what Pyongyang had done so far was aimed at ending its capacity to make “nuclear weapons of the future” during at a luncheon meeting with a special group of advisers on North Korea policy that included a number of former unification ministers and North Korea experts at the Blue House.

“North Korea promised complete denuclearization, and it has taken practical steps to follow through on that promise,” said Moon during the meeting, citing the North’s decision to demolish the Punggye-ri nuclear testing site and dismantle the Sohae missile engine testing site, as well as its suspension of nuclear and missile tests since November of last year.

Moon said these steps were the equivalent of a pledge to give up its ability to develop nuclear weapons and missiles not yet made.

“So to speak, the North has already taken measures to dismantle nuclear weapons for the future,” he said.

It now needs to take steps to relinquish nuclear capability it currently has as demanded by the United States, Moon said.

“What North Korea needs to do now is to not only dismantle nuclear weapons of the future but also relinquish nuclear weapons, material, facilities and related programs that it has at its disposal now,” he said.

Moon said the North has demanded reciprocal acts from the United States for it to take such steps, such as sanctions relief or agreeing to formally end the 1950-53 Korean War, which ended in an armistice, leaving the two Koreas technically at war for 68 years.

He said the North perceived denuclearization actions it has taken so far as “irreversible” while the United States’ reward in exchange - suspending joint South-U.S. military drills - was uneven since war games can be resumed at any time.

Such a gap in perception between the two sides was “the cause for a standoff” in the denuclearization talks, he said.

But Moon pitched an optimistic forecast on how the North-U.S. talks would go forward, saying the two sides would be able to find middle ground considering the fact that the North had “promised to abolish nuclear weapons of the future and present.” In exchange, the United States said it would end its policy of confrontation and guarantee the security of North Korean leader Kim Jong-un regime.

Reaffirming his role as a mediator, Moon said one of his missions was to “search for that middle point and propose it” to Pyongyang and Washington so that “denuclearization can take place more quickly.”

Moon’s assessment that the North had taken practical denuclearization steps that stripped the North of its future nuclear capability echoes what Kim told Moon’s national security adviser Chung Eui-yong on Sept. 5, when Chung met Kim in Pyongyang as a special envoy.

Kim told Chung his country would never be able to conduct another nuclear test since two-thirds of the underground tunnels at the Punggye-ri nuclear testing site had been demolished.