President Moon Jae-in weighed in on a scandal involving the Supreme Court on Thursday and called for a thorough investigation into allegations that a former chief justice pressured judges to make rulings that favored the previous administration. 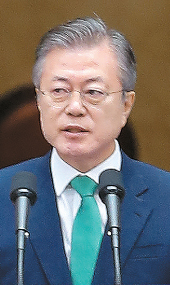 President Moon Jae-in delivers a speech at the Supreme Court on Thursday to celebrate the court’s 70th anniversary. [YONHAP]

A special team of investigators in the Seoul Central District Prosecutors’ Office is investigating Yang Sung-tae for allegedly using sensitive cases as bargaining chips with the Park Geun-hye administration when he was the Supreme Court chief justice from 2011 to 2017. Yang apparently wanted to create a new court of appeals to lighten the caseload in the Supreme Court, allowing the Supreme Court to take on more significant cases. To curry the president’s support for his agenda, he allegedly pressured judges to deliver favorable decisions.

The ceremony was attended by sitting Chief Justice Kim Myeong-su and former chief justices. Yang, however, did not attend.

Moon, who spent most of his career as a human rights lawyer before entering politics, said the ongoing scandal could demoralize those working in the court, but it could also be an opportunity for “self-reform,” and he urged the court to win back people’s trust.

“All the questions must be addressed,” Moon told judges at the ceremony. “If faults are found to have taken place, the judiciary must correct them on its own.”

The president’s call for “self-reform” comes as prosecutors are closing in on Yang and his associates in the Supreme Court who were allegedly involved in meddling on sensitive cases. Prosecutors have been at odds with the court, requesting search warrants for the homes and offices of individuals implicated in the scandal, only to be turned down by the court.

The scandal dates back to May when an internal investigation in the Supreme Court unearthed hundreds of documents in the computers of the National Court Administration, the court’s administrative office, that suggested the court under Yang violated principles of judicial independence. The former chief justice and his associates allegedly drafted a blacklist of judges who opposed Yang’s agenda of setting up a new court of appeals, a goal which never came to fruition.

Yang could be called in for questioning in the coming weeks. If it happens, he would be the first ex-chief justice to face prosecutorial questioning.