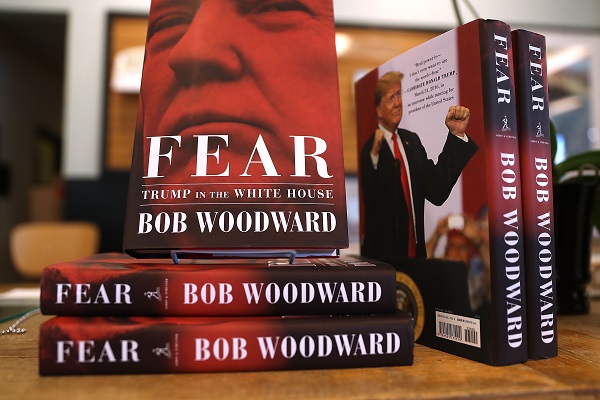 The newly released book “Fear” by Bob Woodward is displayed at Book Passage on Tuesday in Corte Madera, California. [AFP/YONHAP]

Others, like McMaster, were said to have argued internally in the White House that, if Trump was going to attack, it was better to do it early before the North improved its missiles and nuclear weapons.

On July 3, 2017, North Korea successfully tested its first intercontinental ballistic missile (ICBM), a Hwasong-14 that could possibly put
U.S. mainland in range, alarming Washington because the Pentagon had been confident Pyongyang would not have such capability for at least two years.

Operation Plan (Oplan) 5027, the Pentagon’s top-secret contingency war plan in response to an attack, was for regime change in North Korea. Oplan 5015 was a more refined war plan that included strikes on the leadership, namely Kim Jong-un. The U.S. Air Force was said to have run simulated air strikes from Oct. 17 to 19, 2017, in the Missouri Ozarks, a region that has topography similar to North Korea’s,
according to the book.

The tweet never went out.
On Dec. 3, after another North Korean ICBM test, Sen. Lindsay Graham advocated removing U.S. troops’ families from South Korea in an interview. The book says that, the following day, McMaster was informed that Ri Su-yong, a vice chairman of the North’s ruling Workers’ Party Central Committee and director of the committee’s International Affairs Department, told intermediaries “that the North would take the evacuation of U.S. civilians as a sign of imminent attack.”

The book describes the mercurial whims of Trump, with the president demanding that the U.S.-led Terminal High Altitude Area Defense (Thaad) system be relocated to Portland, Oregon, angered that the United States had paid for it while South Korea provided the land.
The deployment of the controversial Thaad antimissile system last year at a former Lotte-owned golf course in Seongju County, North Gyeongsang, came at a large cost for South Korea. Its deployment, meant to defend against North Korean missiles, was protested by locals and also resulted in Chinese economic retaliations against South Korea.

This meeting, arranged by McMaster, came after Trump was described as having badgered South Korean President Moon Jae-in, whom he disliked, in phone conversations threatening to terminate the Korea-U.S. FTA and criticizing the trade deficit and the cost of stationing 28,500 U.S. troops in South Korea. Moon was said to have been conciliatory, saying Seoul wanted to work with Washington since trade and security matters were intertwined.

There was a détente on the Korean Peninsula following the PyeongChang Winter Olympics in February, hosted by the South Korea, putting on hold the so-called U.S. maximum pressure campaign on the North. At one point, Dunford had to halt a U.S. Air Force test of nuclear-capable ballistic missiles from California into the Pacific Ocean, which had been scheduled to take place right before and after the Olympics. Those tests would have been seen as provocative by the North.