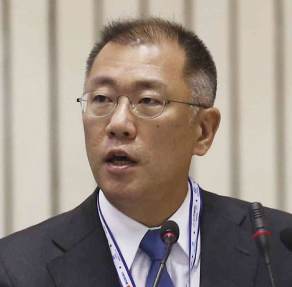 It was his first promotion in nine years. In 2009, Chung was promoted from president of Kia Motors to Hyundai Motor vice chairman.

In his new post, Chung will assist his father, Chung Mong-koo, the group chairman, in the overall management of more than 50 affiliates that range from automaking to steel, construction and finance.

For the last nine years, Chung had only concentrated on Hyundai Motor.

“The latest promotion was a decision made by Chairman Chung Mong-koo,” said the automaker in a written statement Friday.

“It will fortify the group’s comprehensive capability to react to a rapidly changing business environment caused by deteriorating global trade and changes in competitive dynamics in major markets,” the statement added.

With Chung Eui-sun given greater rein, the group expects the 48-year-old to look for new growth engines and enhance competitiveness throughout the company in the face of the so-called fourth industrial revolution.

In fact, Chung has been active in future areas of the car industry, signing partnerships with start-ups from all over the world and recruiting talent from global carmakers. On Friday, before the promotion announcement, Hyundai Motor hired a former Volkswagen brand marketing expert, Cornelia Schneider, to take charge of Hyundai Motor’s brand experience centers around the world and direct exhibitions held in them.

The promotion also sparked speculation that the younger Chung may be in the process of expanding his control over the company because the older Chung, who is 80, has made few public appearance in recent years.

The company, however, denied that speculation, emphasizing that it was the father who gave him the unprecedented promotion. Of the seven vice chairmen in the group, Chung Eui-sun is the only one so far to have received such a new position.