SsangYong is taking back workers

SsangYong is taking back workers

SsangYong Motor and its union came to a tentative agreement Friday to reinstate 119 workers laid off in 2009 in the aftermath of the global financial meltdown. 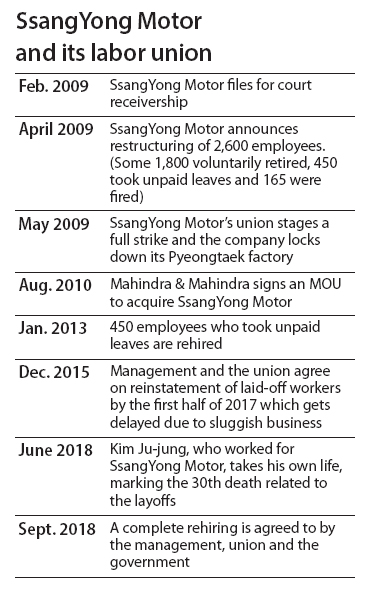 The landmark agreement came nine years after the automaker laid off more than 2,000 employees as part of a restructuring effort.

Choi Johng-sik, chief executive of SsangYong Motor, Moon Sung-hyun, a chief of the presidential advisory group Economic, Social and Labor Council, and representatives of the carmaker’s unions participated in the negotiation Thursday evening that came to the decision.

The carmaker agreed to rehire 119 workers by next year based on the agreement.

Some 60 percent of the workers will be rehired by the end of this year and the rest by next year.

Management promised to finish the rehiring process by the end of 2019.

In return, the union agreed to end all demonstrations against the 2009 layoffs and take down all signs and banners. As long as management adheres to the Thursday agreement, the union also agreed to file neither civil nor criminal complaints against the carmaker.

“It is significant that the union, the management and the government came together to communicate and put an end to the reinstatement issue that has been ongoing for the past 10 years,” said SsangYong Motor CEO Choi in a written statement Friday.

“Although [the agreement was reached] belatedly, we hope for nationwide support to solve remaining issues and reach a complete conclusion,” he added.

Choi Thursday visited a mourning altar set up in front of Deoksu Palace in central Seoul to commemorate some 30 people who died in the struggle over the layoffs since 2009. The latest was Kim Ju-jung, who took his own life in June after fighting for re-employment. Thursday’s visit was Choi’s first time at the mourning altar since it was set up in July.

“It may not be the best agreement, but it was a meaningful result of the effort we’ve put in for the past 10 years,” said Kim Deuk-joong, head of the Korean Metal Workers’ Union’s SsangYong unit at a press conference in front of the altar Friday after the agreement was reached.

“There are remaining issues though, such as the fact that we haven’t received an apology from the government in regard to the state violence we had to go through at the time,” he added.

SsangYong Motor filed for court receivership in 2009 in the wake of the global financial meltdown when its owner, SAIC Motor, pulled out of the business. After laying off some 2,000 workers, SsangYong Motor was acquired by Mahindra & Mahindra in 2010.

In 2013, the company rehired some 450 employees who were taking unpaid leave of absence.

Since 2016, the management has brought back a total of 128 employees who were laid off or submitted voluntary resignation.