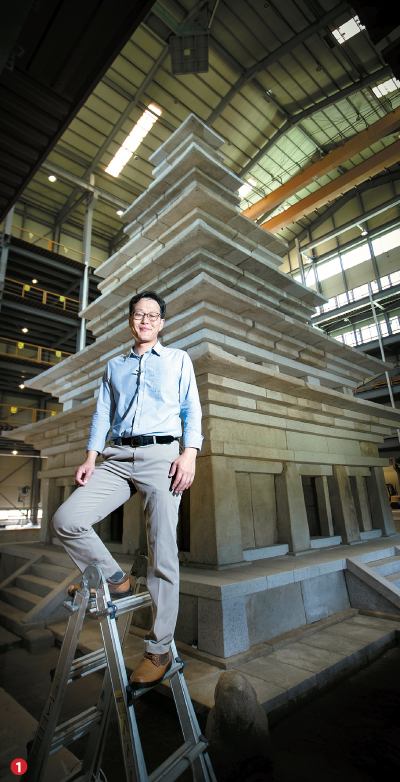 Stone pagodas forged out of granite by skilled masons of antiquity dot the Korean Peninsula, perhaps more so than anywhere else in the world.


Few, however, can compare to the western stone pagoda at the site of the once magnificent Mireuk Temple in Iksan, North Jeolla. The temple was the largest in Korea when it was still standing and one of the oldest in East Asia.


Built under the orders of King Mu during the Baekje period (18 B.C.-A.D. 660) in A.D. 639, the Mireuk Temple represented the pinnacle of Baekje architecture. Of particular note was the nine-story wooden pagoda that stood at its center.


Worn down in the centuries since, the only remnant of this once magnificent complex is the western stone pagoda, one of two that flanked the wings of the wooden tower they were meant to represent.


Originally nine stories tall, the stone pagoda was leveled to six floors by the early 20th century and breaking off on the sides. To prevent the tower from collapsing altogether, Japanese colonial authorities in 1915 poured over 185 tons of concrete on its side. 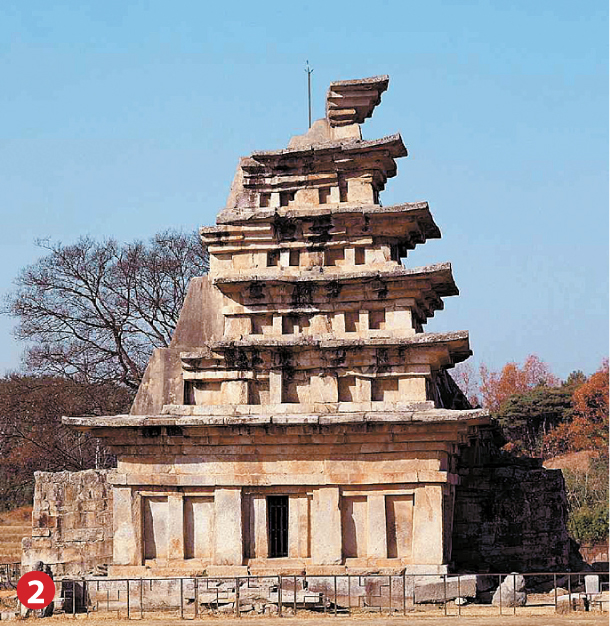 2. The stone pagoda before its restoration, with concrete on its side.

In 1999, the Korean government decided to restore the decaying pagoda to historical accuracy. The restoration project officially kicked off in 2001 with the removal of the concrete, followed by the pagoda’s dismantlement, an excavation and, ultimately, reassembly of the tower.
Archeologists were surprised in 2009 when they discovered several Buddhist relics underneath the pagoda’s base, including a gold plate engraved with Chinese characters that detail the reasons behind the temple’s construction.


The discovery broke new ground on the historiography of Baekje, one of three kingdoms that ruled the Korean Peninsula at the turn of the first millennium along with Goguryeo (37 B.C.-A.D. 668) in the north and Silla (57 B.C.-A.D. 935) in the southeast.


Baekje reigned in the southwest from 18 B.C. to A.D. 660. Much of its history, though, is shrouded in mystery due to the lack of documents from that period. There is the Samguk Sagi, or “History of the Three Kingdoms,” but it was written from the perspective of Silla, the ultimate unifier of most of the peninsula.


In 2015, the Mireuk Temple site, along with seven other Baekje sites, was added to Unesco’s World Heritage List. The restoration project officially concluded this month, and the pagoda is scheduled to be open for public viewing by next March. 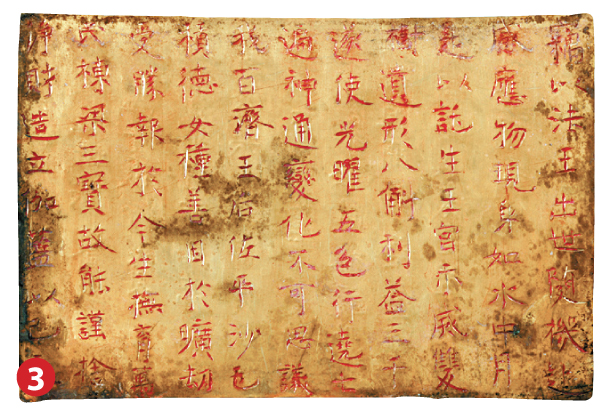 3. A gold plate engraved with Chinese characters that recount the temple’s construction was discovered underneath the pagoda in 2009.

Of the estimated 120,000 people who worked on the project, only one saw the process from beginning to end. Kim Hyun-yong, 42, a curator at the National Research Institute of Cultural Heritage, led the archeological team that restored the pagoda. After dedicating 20 years to the project, he says he feels bittersweet now that it is nearing the end. 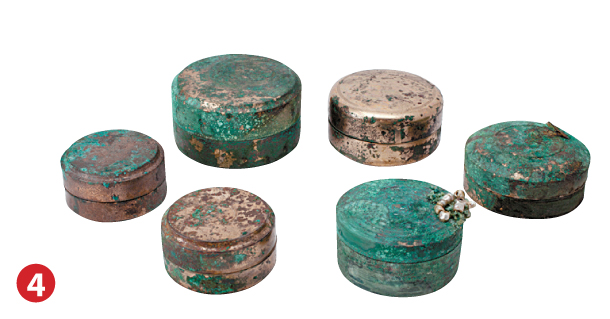 4. Bronze cases with colored beads were found with the gold plate.

The JoongAng Ilbo spoke with Kim about the restoration process at the Mireuk Temple site in Iksan on Aug. 4. Below are edited excerpts from the interview. 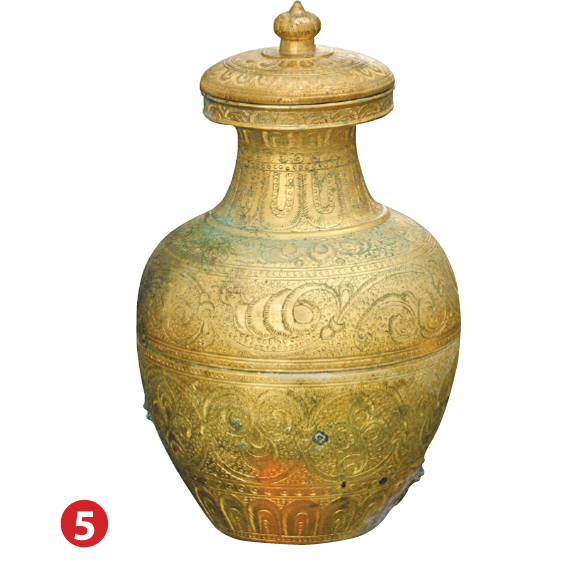 Q. Is most of the construction complete?
A. No. We have yet to dismantle the five-story scaffolding around the pagoda. I am constantly on edge, in fear that the pagoda might get damaged. I can hardly sleep at night. Also on my to-do list is a final report on the restoration project to be submitted next June. Maybe then I can get some rest.


Are you usually this concerned?
I sense the pagoda is listening to me, and I feel exposed every time I am near it. That’s why I watch what I say. In a way, there is a feeling of emptiness now that the project is nearing completion, as if all my energy has been sucked out of me.

Why empty? Aren’t you proud of your achievements?
If you can excuse my exaggeration, it’s as if only the shell is left. This pagoda, which has endured for 1,400 years, may survive for a millennium or two, but we, as humans, are bound to turn to dust very soon. Of course there is a sense of achievement — I cannot deny that we have made history by reviving the father of all pagodas in Korea — but every day in this process was filled with dread.


Why dread?
Some praise us for opening up a new chapter in cultural artifact preservation in Korea, but our descendants may draw a different conclusion. I was filled with shock every time my daughter, who is in fifth grade, asked me why the process took so long and exactly what I did. I feared whether we were wasting the public’s money. I tried my best to ensure we were not committing a sin against history.


The 20-year project cost 23 billion won ($21 million). Why?
This was the longest restoration project for a single structure. It wasn’t easy peeling off the concrete poured by the Japanese in 1915, then dismantling the pagoda stone by stone and then rebuilding it all over again. We reviewed each phase over and over and underwent appraisals from a variety of experts. As a result, we’ve definitely advanced our stone artifact restoration technology, and we’ve already received many foreign visitors wishing to study our methods.

Much of the original stones were used for the restoration. Tell us more about that.
Around 81 percent of all the materials we used to build the restored pagoda were the original stones. Using new stones would make the pagoda look like a 21st-century piece of art. A total of around 2,400 stones were used — 1,627 for the pagoda’s body, 587 for the surface and the rest was used around it. No two stones are the same. Each has a distinct size and thickness. We only used new stones for those that were heavily weathered. Each stone was scanned using 3-D technology and assessed in relation to the ones around it. It was a harrowing process. I think restoring the pagoda took three times more energy than building it from scratch.


Why?
The pagoda is made of stone but is shaped like a wooden one. It is particularly vulnerable to heavy weight and pressure because it was built with thin stones. It is easy to tell its unique features when compared to the Seokga Pagoda at Bulguk Temple, a Silla structure. We even got a patent for a new method to connect old stones with new ones using a titanium pole. This can be used for future restoration projects on stone artifacts.


You said you even dreamed about the pagoda in your sleep.
It came up in my dreams more than my wife (laughs). My wife says this obsession is a disease. It got to the point where I wanted to go back in time to meet the Baekje architect who first built the pagoda and watch the process. We only restored the pagoda up to the six stories that were intact when the project began, but the original tower was nine stories high, and we still do not know the exact dimensions of the upper levels. We do have a reasonable guess, though, and I plan to use this knowledge for my doctoral thesis.

Some have suggested that the tower should be restored to the full nine stories.
The problem is that we don’t have precise documents or resources about the upper floors. If we restored the pagoda to the top using guesswork, this would generate further controversy about historical accuracy. If that were the case, the pagoda would not have been registered as a Unesco World Heritage Site along with other Baekje sites. Building above the sixth story would involve using 60 to 70 percent new materials, and the weight would be too much for the old stones in the lower floors.


Was there a moment when you wanted to quit?
I seriously considered quitting in 2007. At the time, I was being investigated by prosecutors for corruption in historical restoration projects. Apparently many people had doubts about our work because it took such a long time and used a lot of money. We were eventually acquitted of all charges, but I remember feeling despair over having to suffer such humiliation.


What attracted you to the pagoda?
Almost all of the approximately 2,400 stones used in project went through my touch. I suffered from joint pain after scaling the five-floor scaffolding several thousand times. In terms of difficulty, restoring the pagoda was comparable to that of restoring the Seokguram Grotto in Gyeongju. I am not a Buddhist, but I sometimes think in a past life, I must have committed a grave sin against a stone pagoda and am now making up for it. Maybe I was a young monk or servant in Mireuk Temple.

You remind us of two legendary Baekje builders, Abiji, who built the Seokga Pagoda in Bulguk Temple, and Asadal, who built Hwangryeong Temple in Gyeongju.
I would never dare compare myself to those figures, even if they may just be the stuff of legends. I would do anything to be like them. On the first floor of the stone pagoda at Mireuk Temple, there is a cross-shaped corridor that symbolizes the spreading of Buddha’s message to all four corners of the world.
In that light, I would like nothing more than for the restored pagoda to bring peace to the downtrodden of our time. I think maybe the artisans of the past felt the same way.