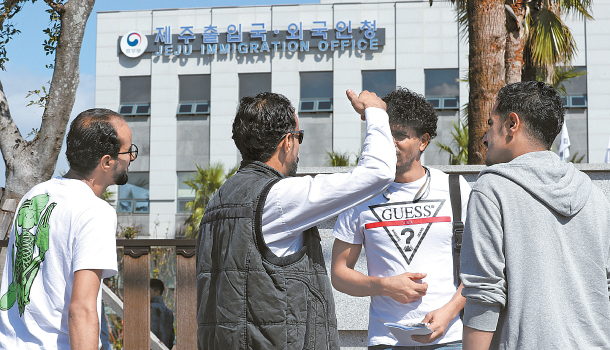 Four Yemenis stand outside the Jeju Immigration Office on Friday, when the office announced that 23 Yemenis will be granted temporary stay in Korea for humanitarian reasons. [YONHAP]

The Jeju Immigration Office said Friday that 23 Yemenis who applied for asylum on Jeju Island can stay in the country for up to a year for humanitarian reasons.

But they were denied asylum status.

“There are 484 Yemenis who applied for asylum from Jeju Island, and of these, we completed interviewing 440 of them,” the office said in a statement on Friday. “Of the 440, we decided to let 23 stay in the country for humanitarian reasons. They were not granted the refugee status, however, because we deemed that they do not have the well-founded fear of persecution for reasons of race, religion, nationality, political opinion or membership in a particular social group.”

Included in the 23 Yemenis are 10 minors, at least one pregnant woman and people with injuries, according to the office.

“These people were granted residence permits for humanitarian reasons because while they do not fit the definition of a refugee, they may face threats to their lives if deported,” the office said. “They can stay in the country for up to a year. But that term may be shortened if the situation in Yemen improves enough to allow their safe return.”

The office said it will finish interviewing the remaining 44 Yemenis by some time next month.

For the 417 already interviewed, the office said it will release a decision on their asylum application as soon as possible.

The refugee recognition system in Korea can be divided into two reviews and three trials: An applicant is reviewed first by a local immigration office; if he or she is refused refugee status recognition, the applicant can appeal the decision to the Justice Ministry; if the ministry upholds the rejection, an asylum seeker can bring the case to a court and get a total of three trials, including appeals.

If the Supreme Court upholds the rejection, the asylum seeker is deported.

South Korea has one of the lowest refugee recognition rates among OECD member countries- it ranked 34 out of 35 OECD member countries in terms of the number of people granted refugee status per 1,000 citizens of the country in 2017, according to the Korean Ministry of Justice.

Korea signed the UN’s Refugee Convention in 1992 and passed a Refugee Act in 2012. From 1992 to June of this year, 42,009 people applied for asylum in Korea. Only 4 percent, or 849, were granted refugee status, according to the Justice Ministry. An additional 1,550 people have been granted temporary stays for humanitarian reasons.

A civil war that started in 2015 has internally displaced over two million Yemenis and driven about 280,000 out of the country to seek asylum, according to figures from the UN High Commissioner for Refugees in March this year.

Word got out among Yemenis that they could enter Jeju Island visa-free and find jobs. More than 500 Yemenis entered Jeju Island between January and May of this year. Jeju adopted the visa-free program in 2002 to boost tourism on the resort island.

Many Koreans have taken issue with the influx of refugees.

A petition on the Blue House’s website in July that called for the government to end visa-free entry to Jeju and consider scrapping or amending Korea’s refugee laws was signed by more than 700,000 people.

Taking into account public concerns, the government banned the Yemenis on Jeju Island from traveling to other parts of Korea at the end of April. On June 1, it added Yemen to a list of countries whose citizens are required to have visas to enter Jeju.

The 23 granted stays in Korea for humanitarian reasons will be allowed to leave the island for other parts of Korea.

“We have confirmed through thorough investigations and interviews of the 23 people that they do not have outstanding issues in regard to relations to terrorist groups or records of drug abuse or crimes,” said the Jeju Immigration Office.

Asylum seekers undergoing a legal process in Korea can be employed. They can work six months after submitting an application for refugee status.

The Blue House made an exception for Yemeni asylum seekers in June and allowed them to find jobs before the six-month mark for humanitarian reasons. The Jeju provincial government has been introducing Yemenis to employment on fishing boats, in fish farms and in restaurants in the island.