Critics call for fighter to withdraw after drunk driving

Critics call for fighter to withdraw after drunk driving

Korean taekwondo fighter Lee Ah-reum’s participation in an upcoming international competition is creating controversy following an incident in which she was caught driving while intoxicated. 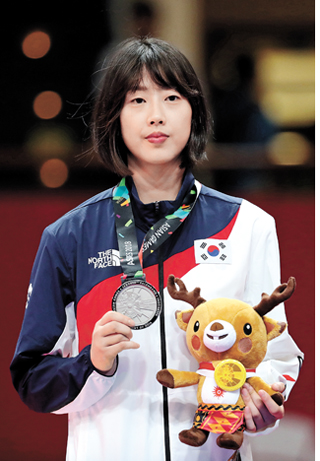 Lee Ah-reum after winning silver medal in women’s 57-kilogram event at the 2018 Asian Games in Jakarta on August 21. [YONHAP]

Korea Taekwondo Association (KTA) on Friday announced a 15-member roster for the 2018 World Taekwondo (WT) 3rd Grand Prix that will be held in Taoyuan, Chinese Taipei, from next Wednesday to Friday.

According to the KTA, Lee will represent the country in the women’s 57-kilogram division. The 26-year-old is one of the top fighters in her weight class, winning a gold medal at the 2014 Incheon Asian Games. At this year’s Asian Games in Indonesia, Lee settled for silver.

But critics are calling for Lee to withdraw from the competition as she is currently facing drunk driving charges.

Lee was caught driving under the influence in Suwon, south of Seoul, on Aug. 28. Local police said she had a .151 percent blood alcohol level and requested prosecutors indict her for drunk driving. Lee reportedly admitted her wrongdoings, saying that she was on her way home after drinking alcohol with her friends.

“WT notified the list of the athletes before Lee’s drunk driving incident occurred, so we had to register her,” a KTA official said. “Lee will be an independent participant this time, so her expenses will not be covered by us.”

So far, the KTA has not figured out a proper punishment for Lee, having only expelled her from the National Training Center in Jincheon, North Chungcheong Province.

“We have not meted out extra punishment since then,” the official said. “We decided to allow her to compete in this Grand Prix because Olympic ranking points are at stake.”

WT Grand Prix is considered an important competition for taekwondo fighters because it gives them an opportunity to win ranking points that will allow them to earn automatic qualification to the Olympics. Withdrawing from the competition without proper reason after receiving an invitation may result in a taekwondo fighter being banned from competing in the next WT Grand Prix.

However, critics are calling for Lee to withdraw from the competition as she is set to receive disciplinary action. Some people have requested that the government strip her of her medals and the pension she receives for her international achievements.

Meanwhile, WT said it’s not difficult for the international governing body to block Lee’s participation first unless the KTA takes action on an incident that happened in its own country.