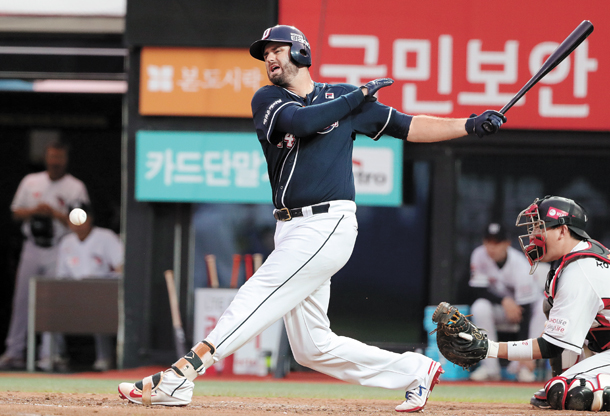 Scott Van Slyke, left, at bat during the Doosan Bears’ game against the KT Wiz at the Suwon Baseball Stadium in Suwon on July 12. [ILGAN SPORTS]

On the mound, the Doosan Bears are benefitting significantly from their two foreign pitchers but in the batting lineup, they are far from successful this season.

After the 2017 season, the Bears parted ways with Nick Evans, who played two seasons with the club. In replacement of Evans, the Bears signed with Jimmy Paredes. Although Evans had a KBO career batting average of .301, the Bears still chose Paredes, as he had the ability to cover first base, third base and the outfield.

Despite expectations, the Bears didn’t see success from their new addition. In 21 games, Paredes had a disappointing .138 batting average, and he was released from the club on June 1.

Then, on June 26, the Bears announced the signing of Scott Van Slyke.

Van Slyke joined the Bears on June 25 to replace Paredes. High expectations were set for Van Slyke to strengthen the Bears’ already strong batting lineup and he was signed for $320,000.

Currently, the Bears have an 11-game lead in the league ahead of the SK Wyverns, but it is highly unlikely that Van Slyke will make an appearance in postseason.

In 12 games, Van Slyke had a .128 batting average with one home run and four RBIs.

Van Slyke started his major-league career with the Los Angeles Dodgers after getting drafted straight out of high school in the 14th round in 2005. In 2012, he was called up to the Dodgers but struggled for most of his time there with injuries.

In January this year, Van Slyke signed a minor-league contract with the Miami Marlins and played on the club’s Triple-A team. In the beginning of May, he was put on a disabled list after an ear surgery, and it wasn’t until June that he returned to the league.

Throughout his MLB career, the 31-year-old Missouri native has had a batting average of .242 with 29 home runs and 95 RBIs. With six years of experience under his belt, the Bears expected him to make a significant impact on the team.

However, Kim struggled due to Van Slyke’s long absence from injury. In the KBO’s foreign player listings, Van Slyke’s name was frequently on scouts’ watch lists but clubs were hesitant to sign him due to his records of injuries.

“He’s a type of player who has a lot of minor injuries,” said a foreign scout. “We questioned his physical condition.”

In the United States, Van Slyke was on the disabled list due to a back injury in 2015 and in 2016, due to back and wrist injuries.

Despite his injuries, the Bears hoped that the two-week Asian Games break would allow him to make a comeback but instead, Van Slyke is once again off the roster due to back pain. During Van Slyke’s absence, Jung Soo-bin returned to the Bears after serving his mandatory military service and Park Kun-woo also returned from an injury. With their return, Van Slyke has lost his spot in the outfields.

While the Bears aren’t benefitting from its foreign player in the batting lineup, the club is benefitting significantly from its two foreign pitchers - Josh Lindblom and Seth Frankoff - on the mound.