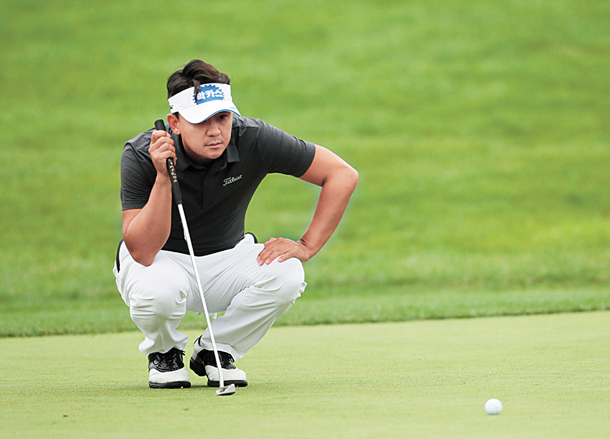 Park Sang-hyun reads the line of his putt during the final round of the 34th Shinhan Donghae Open at Bears Best Cheongna Golf Club in Incheon on Sunday. [YONHAP]

Park Sang-hyun picked up his third win of the season at the 34th Shinhan Donghae Open at Bears Best Cheongna Golf Club in Incheon on Sunday.

Park, who started the final round with a one-shot lead ahead of An Byeong-hun, shot a bogey-free round of eight under par, 63, to finish the tournament at 22 under par, 262.

Park quickly extended his lead with three straight birdies on the first three holes. Then, after a par on par-4 fourth, Park added three more birdies in the front nine to further extend his lead. On par-3 seventh, Park missed the green but successfully made a birdie from the bunker.

After finishing the front nine at six under par, in the back nine, Scott Vincent of Zimbabwe started to move up the leaderboard. A birdie on par-4 15th allowed Vincent to get two shots behind Park, but that didn’t last long as Park responded with a birdie to once again extend his lead by three.

Then, as Vincent made a double-bogey on par-4 16th, Park extended his lead by five and finished the tournament with pars in the last three holes for a victory.

“The course is difficult, so I thought 14 under par will be the winning score, but I shot 22 under par,” Park said. “Actually recording 22 under par is fantastic.”

With a win, Park took home total prize money of 216 million won ($192,660), as well as extending his lead on the KPGA Tour’s Player of the Year standing, money list and average scoring. Park has now earned an exemption onto the PGA Tour’s The CJ Cup @ Nine Bridges in Jeju, the only PGA Tour event hosted in Korea, in October.

An, a full-time PGA Tour player, finished tied for eighth at 11 under par.

On the KLPGA Tour, Lee So-young picked up her third win of the season at the All For You Championship 2018 at South Springs Country Club in Icheon, Gyeonggi on Sunday.

Lee, who started the final round with a one shot lead ahead of Kim A-lim, shot a bogey-free round of five under par to finish the tournament at 19 under par, 269. With a win, Lee became the first golfer to pick up three wins on the KLPGA Tour this season and took home a total prize money of 160 million won.

The KLPGA Tour will continue at the OK Savings Bank Se Ri Pak Invitational, from Sept. 21 to 23, at 88 Country Club in Yongin, Gyeonggi.