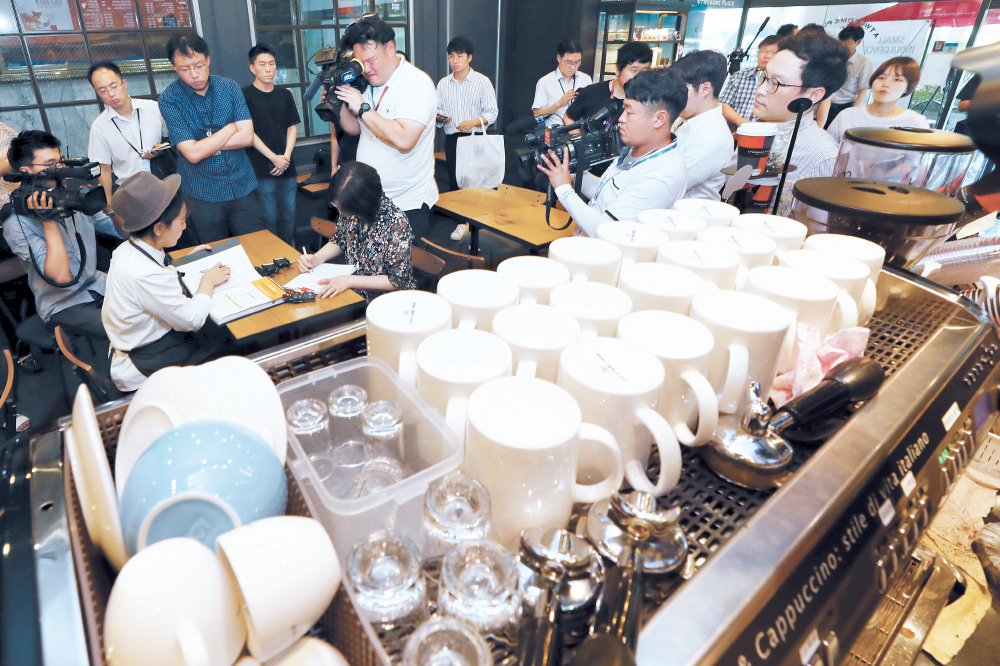 A government official visits a cafe in Jongno District, central Seoul, on Aug. 2 to check whether the business has enough mugs and reusable cups to comply with the ban on plastic disposable cups. From that day, all of Korea’s local governments, including the Seoul Metropolitan Government, began penalizing cafes that serve beverages in disposable plastic cups to customers who drink in stores. [NEWS1]

The first change came in May when the ministry announced that it had partnered up with 21 of Korea’s largest cafe and fast food franchises - including Starbucks and McDonald’s - to reduce waste. Through a voluntary agreement, the franchises promised they would pursue initiatives to make disposable cup material more recycle-friendly and encourage reusable cup usage among customers by offering discounts for people who bring their own tumblers.

Last month, the government dropped a bombshell announcement that it would begin banning all cafes - big or small, franchised or independent - from serving beverages in plastic disposable cups for customers drinking inside stores. While many supported the move, some businesses and customers were less happy as they faced rising costs and greater inconvenience.

More than a month after the regulation was introduced, this week’s debriefing takes a look at the eco-friendly policy moves and how people and businesses have reacted.

Q. Why have Korean cafes stopped offering disposable cups to customers having their drinks to stay?

Starting from Aug. 2, all of Korea’s local governments, including the Seoul Metropolitan Government, began penalizing cafes that serve beverages in disposable plastic cups to customers who drink in stores. The Environment Ministry provided guidelines to local governments on how to investigate and identify cafes that are breaking the new regulation.

The legal basis for the ban on plastic disposable cups indoors comes from Article 41 of the Act on the Promotion of Saving and Recycling of Resources. This article states that businesses or individuals who offer disposable products free of charge to customers in meal service facilities, including cafes, can be fined.

However, only disposable plastic cups are subject to the ban. Stores may continue offering customers disposable paper cups, plastic cup lids and plastic straws. Bottled beverages, such as water and juice, in plastic bottles are also not subject to a fine.

Q. Do cafes face consequences for disobeying the new law?

Yes, cafes can now be fined up to 2 million won ($1,800) for serving beverages in disposable plastic cups to customers who have their drinks inside the store.

Fines will vary depending on the size of the store and the number of times it has violated the ban.

Q. Have any cafes actually been penalized for breaking the law?

No cafe has been penalized as of Sept. 14. As the ban was implemented less than two months ago, the Environment Ministry said it is offering a grace period for cafes that have been cautioned for their plastic cup use to adjust to the new regulations before they are fined. The ministry has not confirmed the length of the grace period or the number of cafes that have been cautioned.

Q. What spurred this new regulation?

Actually, the ban on plastic disposable cups being served indoors has been included in the Act on the Promotion of Saving and Recycling of Resources since as early as 2003.

The plastic waste crisis at the beginning of the year, however, pushed the ministry to give teeth to the existing regulation.

In January, China announced that it would no longer import plastic waste from abroad, citing domestic environmental concerns. This caused a crisis in Korea, which used to export huge amounts of plastic waste to China, and by April, domestic recycling companies were also refusing to collect plastic waste as they could no longer sell them to China for profit.

On May 10, the Environment Ministry announced a long-term plan to reduce plastic waste by 50 percent by 2030. In a comprehensive report, it also cited alarming figures that shone light on the dark side of Korea’s flourishing cafe culture. The number of disposable cups Koreans consumed annually had jumped from 19.1 billion in 2009 to 25.7 billion in 2015.

The enforcement of the ban was one of many measures the government proposed to curb plastic waste creation.

Q. Are there any criticisms of the move?

The ban has many critics, with one side saying it is too harsh and the other arguing that not enough is being done.

Coffee shops, especially small and unfranchised cafes, are finding it financially burdensome to suddenly have to purchase reusable cups and dishwashers to comply with the ban. Cafe employees also complain that washing reusable cups means more work for them.

Customers, for their part, take issue with how the ban requires them to immediately leave the store if they get a takeout beverage. If customers want to sit and chat in cafes for a short while before taking their unfinished drinks outside, they need to ask employees to transfer their beverages from mugs to disposable cups.

Environmental activists, on the other hand, feel that the ban is not effective as it only targets plastic disposable cups and not other waste.

They point to how it is still legal for cafes to serve customers drinks in disposable paper cups, a fact that many cafes are taking advantage of by just serving beverages in paper cups instead for customers drinking in stores.

Q. Are there any other measures that coffee shops are taking to cut down on waste?

Yes, the 21 cafes and fast food franchises that signed the voluntary agreement back in May have been going out of their way to cut down on disposable waste.

Plastic straws are believed to be more harmful to the environment than plastic cups or lids as they are almost impossible to recycle.

Coffee stores that have not signed the voluntary agreement are also taking extra steps to cut down on disposable waste. Paul Bassett, for example, offers a 500-won discount for customers who bring in tumblers.

The government is also trying to help cafes comply with the new ban. In August, the Environment Ministry offered over 20,000 mugs and 74 dishwashers to cafe franchises that signed the voluntary agreement to help support franchisees who were struggling financially to comply with the ban.