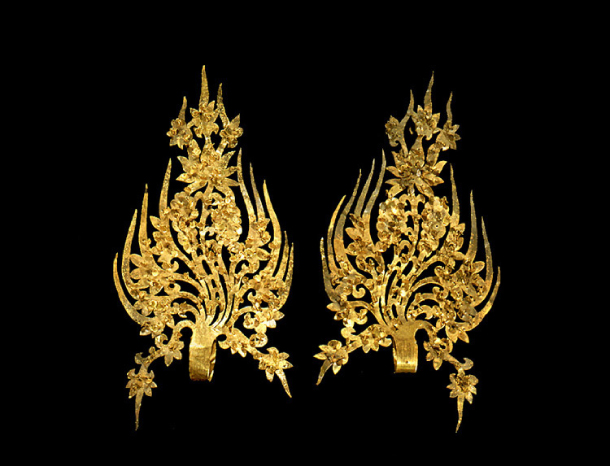 
This pair of golden ornaments from a crown was made in the Baekje period. They were excavated from the Royal Tomb of King Muryeong in Gongju. One is 30.7cm (12 inches) tall and 14cm wide, and the other is 29.2cm tall and 13.6cm wide. They were found from the head of the king’s coffin, which was excavated in 1971. A gold plate is cut into the shape of a vine.

There are a couple of branches at the bottom with a few tiny holes on the upper and lower parts. The holes seem to have been used to hang the ornament on an object. A flower pattern is in the middle of the branches, which are parted to the left and right. The long branches make the ornament look like a flame. The two lower branches are hanging down, giving a variation to the design. There are 127 bead-shaped decorations tied with golden string all over the front side of the ornament.

This tomb was built for King Muryeong, the 25th king of the Baekje Dynasty who reigned from 501 to 522, and his queen.

It’s one of the most well-known royal tombs because it’s one of the rare tombs that were built with bricks, and also a great amount of burial goods - 2,906 pieces of remains ranging over 108 categories - were excavated from it.

They have been regarded as important sources for studying Baekje, particularly the culture and customs of the ancient kingdom.

Among them, jiseok, a slab of stone inscribed with the deceased’s date of birth and death together with his achievements, reveals the exact owner of the tomb and the exact date of construction.

The Royal Tomb of King Muryeong is the first among all the tombs from the Three Kingdoms Period that records the name of the buried king and the exact date of construction.