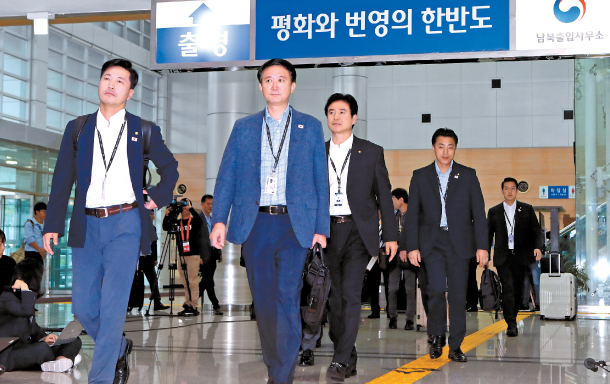 An advance team of more than 90 South Koreans, led by Suh Ho, the presidential secretary for unification policy, pass through the Customs, Immigration and Quarantine (CIQ) office in Paju, Gyeonggi, en route to Pyongyang Sunday to make logistical preparations for the inter-Korean summit from Tuesday to Thursday. [YONHAP]

The presidential office released a list of 52 special entourage members who will accompany Moon to the North Korean capital starting Tuesday.

Backgrounds of the 52 special entourage members vary from the C-suites of major conglomerates to sports, politics and the K-pop world.

Hyun Jeong-eun, chairwoman of Hyundai Group, which has deep ties with the North, Koo Kwang-mo, newly named Chairman of LG Group, and Kim Yong-hwan, vice chairman of Hyundai Motor Group are also part of the entourage.

“Special delegation members of 52 include third-generation members of families separated by the Korean War and figures from various walks of life including politics and business,” said Im, who heads the summit preparation committee. He noted that three political party leaders - Chairman Lee Hae-chan of the ruling Democratic Party; Chung Dong-young of the Party for Peace and Democracy; and Lee Jung-mi of the Justice Party - will also go.

Park Yong-maan, chairman of the Korea Chamber of Commerce and Industry, and the leaders of two umbrella labor unions - the Korean Confederation of Trade Unions and the Federation of Korean Trade Unions - will also join the president.

Im said that compared to the two previous summits held in Pyongyang in 2000 and 2007, the size of group of business leaders is smaller because the total number of South Koreans traveling to Pyongyang is smaller this time around.

“While a schedule remains to be fine-tuned, it was agreed at working-level talks that the business leaders will meet with Deputy Prime Minister Ri Ryong-nam,” Im said.

The two K-pop stars that made the list include rapper Zico and Korean-American singer Ailee. They are expected to stage a performance for a North Korean audience during their three-day stay. Renowned songwriter Kim Hyung-suk also made the list.

Park Jong-ah, who was captain of the joint North-South women’s ice hockey team in the 2018 PyeongChang Winter Olympics, will also be a special entourage member and reunite with former teammates.

From the political arena, the Blue House initially asked a total of nine major political figures including leaders of the major opposition party and National Assembly Speaker Moon Hee-sang to go to Pyongyang. The conservative Liberty Korea Party and the centrist Bareunmirae Party refused the invitation, saying their presence in Pyongyang would merely help the presidential office score political points.

The three party leaders who are going will have a meeting with Kim Yong-nam, the nominal head of state who serves as president of the Presidium of the Supreme People’s Assembly, Im said.

From Moon’s special advisory group on North Korea and academia, Hong Seok-hyun, chairman of the Korea Peace Foundation and JoongAng Holdings, and Moon Chung-in, Moon’s special foreign affairs adviser, made it into the 52-member group.

Asked why policy director Jang and Kim were not included in the delegation, Im said the decision was made taking into account a myriad of important domestic issues such as economic conditions and the real estate market.

An advance team comprised of around 90 individuals left for Pyongyang to prepare for the summit on early Sunday.

The entourage is expected to fly with Moon on Tuesday on a direct flight above the Yellow Sea, the same route taken by former President Kim Dae-jung for the first inter-Korean summit in June 2000. Seven years later, former President Roh Moo-hyun crossed the border on foot and went to Pyongyang by car. It will be the first since 2000 for a president to fly to the North Korean capital. Among the 200 are 15 joint press corps members.

Im said the total number of South Koreans who will join Moon will be slightly more than the 200 that had been initially planned to account for television crews for live coverage of important moments, such as the first encounter of Moon and Kim in Pyongyang. He did not provide an exact number.

Once landing at Pyongyang’s Sunan International Airport Tuesday, Moon is expected to be greeted by North Korean leader Kim, in the same manner his father, Kim Jong-il, did Kim Dae-jung on June 13, 2000. Moon is then expected to inspect an honor guard.