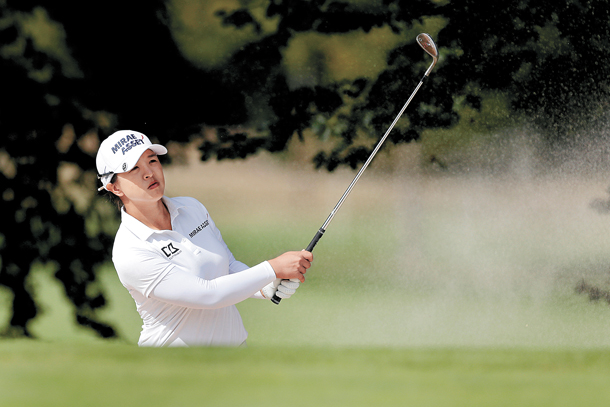 Kim Sei-young hits a bunker shot during the final round of the Evian Championship at Evian Resort Golf Club in France on Sunday. [EPA/YONHAP]

Korean golfers came up short at the final major of the 2018 LPGA season in France on Sunday.

Seven-time LPGA winner Kim Sei-young was the top Korean at the Evian Championship at par-71 Evian Resort Golf Club in Evian-les-Bains, eastern France, where she finished tied for second place at 11-under 273. Kim and three others ended up one shot behind the champion, Angela Stanford.

Kim, world No. 19, began the final day alone in second place at 12-under, two strokes behind the overnight leader, Amy Olson. But an up-and-down round of 72 that featured three birdies, two bogeys and a double bogey left Kim still searching for her first major title.

With Stanford having finished her tournament earlier at 12-under, Kim stood over a birdie putt at the 18th that would have put her in a playoff with the American. But Kim rolled it a few inches past the cup to settle for her second career runner-up finish at a major after 22 appearances.

Kim got within one of Olson at the second hole when Olson committed a bogey and Kim had a par. Both players birdied the third hole, and Olson stayed out in front of Kim through seven holes.

Olson fell into a tie with Kim at 13-under after bogeying the par-four eighth hole. Kim, who just missed a birdie from off the green at the eighth, couldn’t drain a short birdie putt at the par-five ninth. She and Olson remained tied at 13-under at the turn.

The Korean then took a tumble with a disastrous double bogey at the par-four 10th to drop to 11-under. Kim also had a double bogey on the same hole during the first round.

That gave Olson a two-shot lead over Kim and Stanford, with three others sitting at 10-under.

Kim made a clutch par putt at the par-four 11th to stay in the hunt, after putting her tee shot into the rough and her second shot into a greenside bunker.

Then over the next four holes, Kim went bogey-birdie-bogey-birdie to stay at 11-under, still two behind Olson. Olson briefly reached 14-under with a birdie at the par-five 13th, only to give a shot back at the next hole, the par-three 14th, with a bogey.

Kim couldn’t take advantage of that small opening, as she closed out with three straight pars.

Olson seemed poised for her first career major win until her stunning collapse at the 18th. Nursing a one-shot lead over Stanford at 13-under, Olson pulled her drive into deep rough and needed two more shots to find the green. She three-putted from there for a double bogey that dropped her into a four-way tie for second.

Among other Koreans, Lee Jeong-eun, the 2017 Korea LPGA Tour Player of the Year, tied for sixth at 10-under 274. She closed her round with a birdie for a two-under 69.

Seven-time major champion Park In-bee was one shot behind Lee in a two-way tie for eighth, after a round of 71.

Park was trying to complete her “super career grand slam” by winning her fifth different major. Park has won four of the five LPGA majors at least once over her Hall of Fame career, with the Evian Championship being the only missing piece. She won at Evian-les-Bains in 2012, when the event was called the Evian Masters, and was one year away from earning the major championship status.

Former world No. 1 Ryu So-yeon was the fourth Korean inside the top-10. She tied three others for 10th at eight-under 276, after a final round of 68.