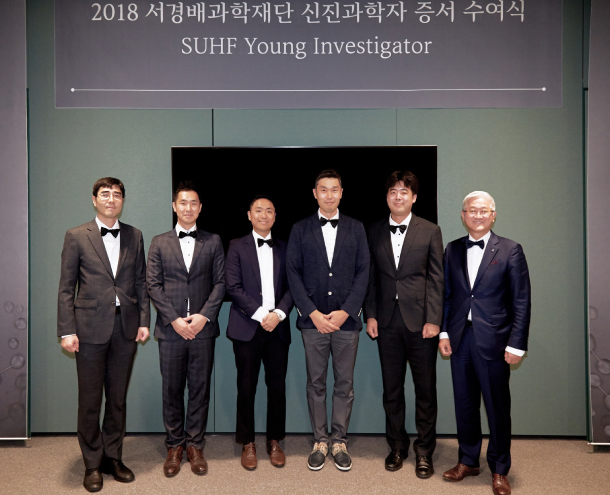 Amorepacific Chairman Suh Kyung-bae, right, poses with five scientists selected by his foundation this year to receive funding for research in biotechnology over the next five years at Amorepacific’s headquarters on Thursday. [SUH KYUNGBAE FOUNDATION]

The foundation was established last year with a 300 billion won ($266 million) donation from Suh, the chairman of Amorepacific. It selects five biotechnology scientists annually to receive financial support for their research activities for the next five years. Each project will receive between 300 to 500 million won every year. This year marks the second round of grants.

The five scientists were selected based on 92 science projects submitted by young professors appointed in the last five years. They received certificates from Suh in an event held Thursday at Amorepacific’s headquarters in central Seoul.

“I was able to see that a lot of researchers nowadays are devising studies that are more experimental and long-term while evaluating the projects submitted for the support program,” said Chung Chin-ha, one of the judges at the foundation and an honorary professor of biological sciences at Seoul National University.

The professors are Kim Jin-hong of biological sciences at Seoul National University, Park Hyun-woo of biochemistry at Yonsei University, Woo Jae-sung from Korea University’s Division of Life Sciences, Jung In-kyung from the Department of Biological Sciences at the Korea Advanced Institute of Science and Technology (Kaist) and Ju young-seok of Kaist’s Graduate School of Medical Science and Engineering.

“[They were] chosen among candidates for suggesting the most adventurous and unconventional projects. In order to encourage a free and experimental research environment we plan to ensure their autonomy [during the support period],” the foundation said in a statement.

Professor Lee Jeong-ho of Kaist’s Graduate School of Medical Science and Engineering, who received funding from the foundation last year, published findings from his team’s study of neural circuits in Nature magazine.