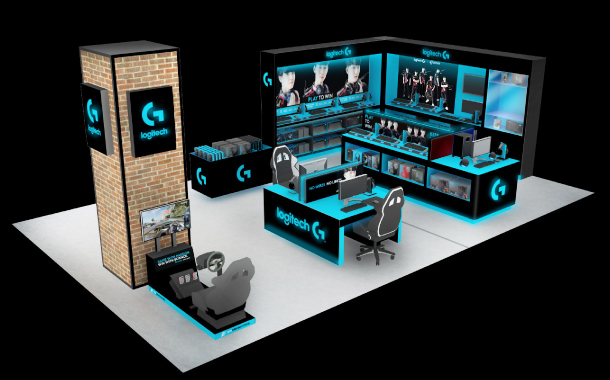 A computer image of Logitech’s brand zone inside the gaming gear section of Electro Mart in Yongin, Gyeonggi. [EMART]

Emart is opening a haven for PC gamers in Yongin, Gyeonggi, this week.

The discount chain announced Monday that it will open a 181-square-meter (1,948-square-foot) zone specializing in gaming accessories like keyboards, mice and headsets on Friday. The section will be part of the Electro Mart stand-alone electronics store at Emart’s Jukjeon branch in Yongin, Gyeonggi.

A total of 180 or so gaming gadgets will be featured at the store. Accessories will start around 20,000 won ($17.75) and run to the 100,000-won range. Emart said it will cater to the needs of both new gamers and seasoned amateurs looking to move onto more professional gear.

Logitech and ASUS which are considered industry leaders in gaming gear, will offer large amount of items at the Jukjeon store, along with Xiaomi. Logitech and Xiaomi will each have a section of their own to display all their products. ASUS will display its gaming laptops.

Emart explained that the booming popularity of E-sports and a growing market for gaming equipment spurred the launch of the special shop.

“The PC gaming population is widening across genders and generations,” said Lee Min-kyu, a product buyer at Emart in charge of electronics. “This trend is contributing to the electronics market as a whole, and we think this tendency will continue for a while.”

In addition to the gaming store in Jukjeon, Emart said it will install smaller gaming zones at 20 Electro Mart branches across the country.